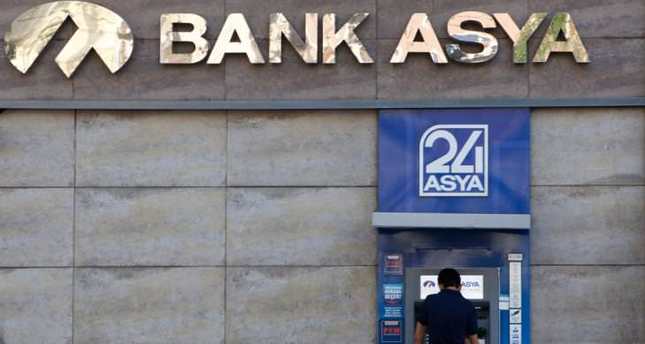 by Daily Sabah Sep 15, 2014 12:00 am
Bank Asya, a lender known for its close ties with the Gülen Movement - whose followers are believed to have orchestrated the Dec. 17 coup attempt against the government - has been experiencing a financial crisis due to huge deposit outflows. According to data released by the bank itself and the Banking Regulation and Supervision Agency (BDDK), the bank has experienced a deposit outflow of TL 6 billion and a decrease in assets of TL 7.6 billion with an 81 percent drop in its profits in the first half of this year. Further, the default loan amount of the bank has reached TL 1.5 billion, and the rate of loans being followed up has increased to 10 percent.

Aug. 7, Bank Asya's shares were suspended on Turkey's stock market (the BIST-100) board for an indefinite period of time when irrational fluctuations occurred in the price of the shares. A few days later, the BIST issued a statement providing the reason for suspending the trading of shares of Bank Asya - under the name ASYAB. A statement noted that contradictory news announced by various media institutions about the partnership structure of the bank caused the fluctuation in the prices of share certificates.

Some analysts predict that Bank Asya's shares are expected to re-open for trading on BIST's board within seven to 10 days. "If the BIST enables the trading of Bank Asya shares, it is clear that shares will go deep under water, which will put the bank's balance sheet in an even a worse condition," economist and academic Dr. Cemil Ertem told Daily Sabah. He also noted that due to a drastic decrease in the value on the BIST, the bank would not able to fulfill its liabilities. "The Saving Deposit Insurance Fund (TMSF) - the governing body concerned with matters of fund management and insurance in the Turkish banking system - has a legal right to seize control of the bank to prevent a greater financial and structural crisis that could affect the overall banking system in Turkey," Ertem remarked. "After a respectively stable financial condition is observed in the bank's balance sheet, the TMSF would sell the bank to a more reliable investor," Ertem said.

The international credit rating agency Moody's lowered Bank Asya's credit rating from "Ba2" to "B2" and financial power note from "D-" to "E+." According to the statement from Moody's, the reasons for lowering the credit rating of the bank was the decrease in the bank's papers, negative asset quality trend, volatility in funding and the decrease in profitability.
Last Update: Sep 15, 2014 1:19 am
RELATED TOPICS