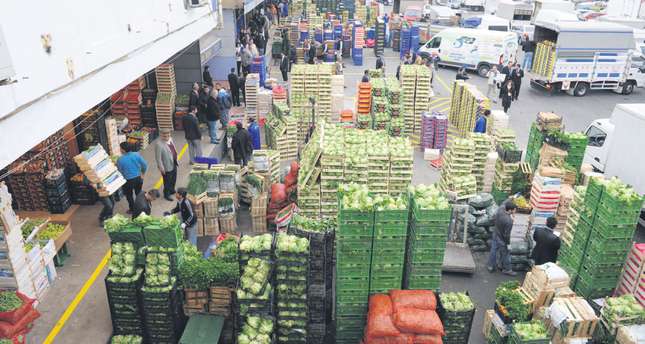 According to data released by the Turkish Statistical Institute (TurkStat), food and non-alcoholic beverage prices increased by 14.44 percent in August compared to last year. Food and non-alcoholic beverage prices account for 24.5 percent of the inflation calculation, and this surge is one of the main reasons behind high consumer prices that increase by 9.54 percent annually. The inflation rate, which has persistently been in the high single digits or low teens due to food price increases, has once more drawn attention to the large difference between consumer and manufacturer price indexes of food products, with many experts blaming the intermediaries for the huge disparity.

Turkish Agriculturalists Association Chairman İbrahim Yetkin stated that there has always been a difference between consumer and manufacturer prices and that manufacturers introduce foodstuffs to the market either at their original cost price or a little bit more than the actual cost price.
Emphasizing that food products are introduced to consumers after certain processes, Yetkin stated that the reason behind the high Consumer Price Index (CPI) is the profit margins in agriculture and food sectors. "In the agricultural sector, the price manufacturers usually offer for their products and the price consumers have to pay has a difference of 100 percent. In some cases, this difference is even 300 percent. This is why food prices are the underlying reason for high inflation rates in our country," said Yetkin. He further stated that since most agricultural manufacturers act in a disorganized fashion without any union or association, the full potential of agricultural products is not utilized. Yetkin added that the surges in consumer prices are based on the increase in input prices.

Union of the Turkish Chambers of Agriculture (TZOB) Chairman Şemsi Bayraktar also stated that the difference between manufacturer and market prices should also be considered, as in August, while parsley was purchased for TL 0.13 TL, its market price was TL 0.77. The difference between manufacturer prices and consumer prices was around 492 percent for parsley, 415 percent for lemons, 329 percent for lettuce and 303 percent for zucchinis. Bayraktar asserted that such huge differences were due to certain processes agricultural products have to undergo before they are offered to consumers, such as packaging, delivery and other high-cost processes.

There are various different mediators involved in these processes that come under the umbrella term "marketing channels." It includes purchases made by the state and certain co-ops, merchants, brokers, distributers, wholesalers and retailers, and as the number of mediators and marketing channels increase, food prices also increase proportionally.

Bayraktar also stated that lack of knowledge and small-scale enterprises are causing problems in Turkey and that to overcome such problems and in turn decrease marketing costs, the sector should be more organized and unionized and allow marketing to be undertaken by manufacturer organizations. "We have to increase the competitive power of our products in international markets," said Bayraktar.

Bayraktar emphasized that with a licensed warehouse system for storable products, price surges and instabilities occurring due to the harvest season can be prevented. Furthermore, mediators would not be able to obtain undeserved gains in this manner. "Additionally, manufacturers should be supported, incentives should be offered for agricultural investments, and manufacturers should receive training in marketing methods," said Bayraktar.

Pointing out that structural problems are heavy burdens and that it is impossible to exercise any kind of low-cost manufacturing without resolving these problems, Bayraktar added that to lower agricultural costs, the costs of inputs such as diesel fuel, fertilizer, pesticide and electricity should be decreased. "The most important structural problem is that agricultural estates may become fragmented. This decreases the size of the enterprises and causes many companies to have only small agricultural estates. There are 3 million enterprises in Turkey, while there are 30 million parcels of land. The average scale of enterprises in the U.K. is 538 decares, 521 in France, 457 in Germany and 238 in Spain, while the scale has now decreased to 59 decares in Turkey," said Bayraktar.
Last Update: Sep 15, 2014 1:21 am
RELATED TOPICS