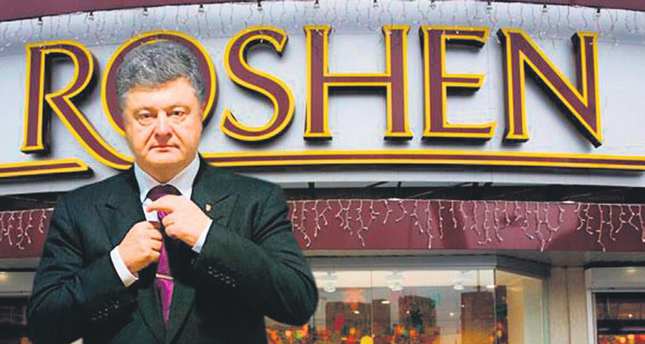 Petro Poroshenko promised when he was elected in May to sell his candy empire. Despite making $1.2 billion in annual sales, Ukraine's president, also known as "the chocolate king" may have a hard time finding a buyer for his company

A chance to buy the candy empire of Ukrainian President Petro Poroshenko is the kind of opportunity in a fastgrowing market that would normally have multinational confectioners - like Nestle or Cadbury's parent Mondelez - drooling at the prospect. But despite owning factories in four countries and making $1.2 billion in annual sales, Ukraine's "chocolate king" may have a hard time finding a buyer for his company, now that its founder is the leader of a country at war.

After years of combining his career as a billionaire candy boss with posts in successive governments, Poroshenko promised when he was elected in May to sell Roshen, the confectionary empire named for the middle two syllables of his surname. He has since hired advisors Rothschild and local firm Investment Capital Ukraine to drum up investor interest. On paper, there is a lot to tempt investors. Eastern Europe is a region with a sweet tooth, accounting for 12.8 percent of global candy sales despite a much smaller share of the world's population. Roshen is the region's second biggest locally-owned producer, ranked 18 in the world by net sales according to the Candy Industry Top 100. Apart from its main factories in Ukraine, it has plants in EU members Lithuania and Hungary as well as in Russia.

In a region where tastes are still dominated by local habits, its decorative assortment boxes with names like "Kiev Evening" and "Royal Dessert" hold their own against global chocolate brands. Although it could be broken up into parts, an asking price that insiders say is likely to be around $1.5 billion (TL 3.3 billion) means the company is probably too big to be swallowed whole by domestic players in Ukraine. That would seem to make it a perfect target for firms like Switzerland's Nestle or Mondelez, the U.S. snack and confectionary business split off from Kraft that includes Britain's Cadbury. Both are investing in the region and not shy about acquiring local brands. Nestle has looked at buying other confectionary businesses in Ukraine, the sources said, while Mondelez announced in April it is spending $110 million to open its fifth factory in Russia next year. But finding a buyer for a company associated with a war-time leader is no simple matter.

Kiev says Russian forces have supported pro-Russian separatists in the east of Ukraine in a conflict which has killed more than 3,000 people, although a ceasefire has been in place for a week. Moscow annexed Ukraine's Crimea peninsula in March and President Vladimir Putin now calls eastern Ukraine "New Russia", although he denies involvement in the war. Those close to the effort to sell Roshen say the company's prospectus is being shopped despite the conflict. "Contact has been made with prospective buyers but it's very preliminary," said one of the sources, who declined to be identified as the process is private. "This is a big and complex situation and any sale is not going to happen in a few weeks.

Don't expect anything imminent." Financial sources closely following the deal said that given the tense political situation, any sales process is likely going to be complicated because commercial or strategic logic won't apply. Large international players are unlikely to table bids before the conflict is clearly over, they said. Roshen would be attractive to confectionary companies in the low-to-mid-market chocolate range who are keen on expanding in emerging markets and willing to navigate political interference. Mars, the world's biggest chocolatier, is unlikely to be interested because it only markets its own brands. But in addition to Nestle and Mondelez, interested parties could include Korean firm Lotte which entered the region in 2010 with the purchase of Poland's Wedel from Kraft Foods, and Turkish food manufacturer Ülker.