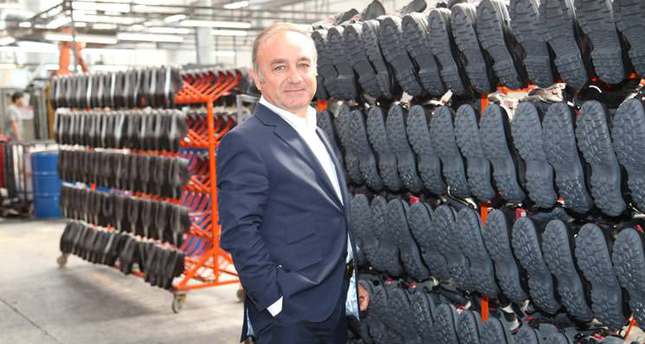 by Daily Sabah Sep 15, 2014 12:00 am
CEO of the Turkish boot manufacturer Yakupoğlu Deri Sanayi (YDS) A.Ş. Vedat Yakupoğlu announced that they have won the largest military boot tender in the world. According to Yakupoğlu, the new military boots used by the Russian Army will all be produced by YDS A.Ş. Stating that the boots have been specially designed to endure minus 40 degrees in Russia, which has an extremely cold climate, Yakupoğlu said, "These boots are resistant to cold, and the newest version is also water proof. This was a $100 million [TL 221.75 million] business. It was the largest tender in the world in this respect. 100 percent breathable and waterproof leather boots have many other technical qualities."

Yakupoğlu stated that they had to achieve very high technical quality standards and added, "I am proud of our country. While we are no. 1 in exports in the sector, this has to be sustained. We have to be competitive and build good relations in international markets." He further announced that they have received an order for 125,000 pairs from Azerbaijan and have now signed the contract for this order.
Last Update: Sep 15, 2014 1:23 am
RELATED TOPICS