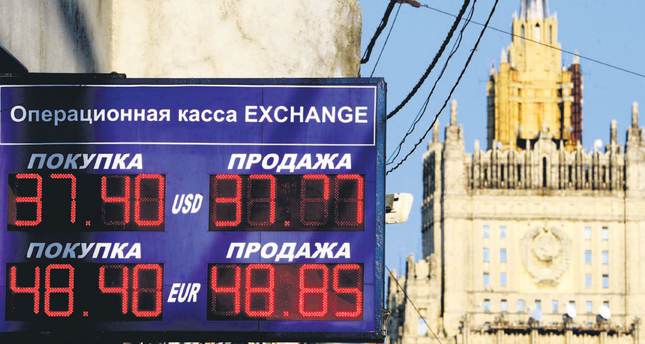 Russian authorities tried to reassure the markets on Tuesday as the battered ruble plunged to a record low, after being floored by tensions with the West over Ukraine, new sanctions and falling oil prices

The national currency fell to a record level of 38.82 rubles per dollar after weakening on Monday to below 38 against the dollar for the first time. And it broke through the symbolic level of 50 rubles per euro for the first time for several months. The ruble has slumped as investors fret about the impact of ever more stringent Western sanctions on the economy, which is already teetering on the verge of recession.

Ordinary Russians said they were concerned that a weaker ruble would drive up inflation and make foreign trips and foreign currency-denominated purchases an increasingly unaffordable luxury. Deputy foreign minister Alexei Moiseyev sought to put on a brave face, saying authorities were taking steps to curb inflation."Don't panic," he said on Tuesday. The euro was worth 50.11 rubles at 7:54 a.m. on Tuesday, almost one ruble more than its value the day before. The Russian currency is still worth slightly more than at its lowest point in the spring of 50.22 rubles to the euro after Russia's annexation of Crimea in March. Since the start of September, the dollar has increased 1.70 rubles in value.

On Tuesday afternoon, the ruble slightly recovered to 38.63 against the dollar and 50.02 against the euro. "The ruble has come under renewed fire over the past few weeks.

The central bank has been cutting its forex intervention as it gears up to allow the national currency to float freely from 2015. Banking analyst Mikhail Kuzmin of Investcafe.ru said the central bank did not have the necessary firepower to stop the ruble's slide, even if it wanted to do so. "To prop up the ruble exchange rate, you need very significant resources. The central bank could risk spending a lot over a month or two and then the ruble will fall anyway. But the weak ruble stands to benefit exporters, particularly those selling oil for dollars, which will increase budget revenues.

For the Russian economy there is also a plus - citizens will be more likely to go on holiday and spend money inside the country," Kuzmin told AFP. But ordinary Russians said an increasingly weakening ruble was putting the squeeze on their finances. "It's a disgrace, I am very much worried," Larisa Krasnopevtseva, a 53-year Muscovite, told AFP. "The purchasing power of our ruble is dropping. It means I will rest less, work more and have worse medical care. I don't know what's behind this fall, but I [really] don't like it." Maria Bunina, 57, said she needed U.S. dollars to travel abroad. "Now, nearly all my money is spent on food and utilities," she told AFP. "A trip to France is my dream, but it's very expensive.

The United States and European Union last week hit Russia with tough new sanctions over Moscow's "unacceptable behaviour" in Ukraine. Russian President Vladimir Putin, who enjoys popular support in a country where all the main television channels are state-controlled, dismissed sanctions and said they would do "more good than harm."
Last Update: Sep 17, 2014 1:49 pm
RELATED TOPICS