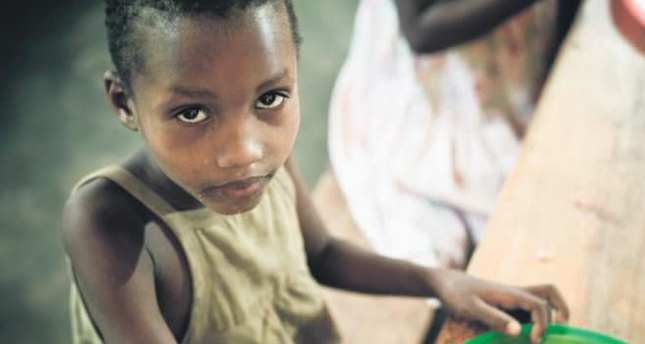 by Sep 17, 2014 12:00 am
The number of hungry people in the world has dropped by 100 million over the last 10 years, though one in nine are still undernourished, with Asia home to the majority of the underfed, the UN said yesterday.

The UN's food agencies said the global number was down over 200 million since the early 1990s, but warned that despite the progress made, "about 805 million people in the world, or one in nine, suffer from hunger." The Millennium Development Goal of halving the proportion of undernourished people by 2015 is within reach "if appropriate and immediate efforts are stepped up," the Food and Agriculture Organization, International Fund for Agricultural Development and World Food Programme said in a joint yearly report. To date, 63 developing countries have reached the target and six more are on track to reach it by 2015, they said.

"This is proof that we can win the war against hunger and should inspire countries to move forward, with the assistance of the international community as needed," the agencies said in a joint message. The "State of Food Insecurity in the World" report said access to food had improved rapidly in countries that had seen overall economic progress, notably in Eastern and South-Eastern Asia, but also Southern Asia and Latin America. However, despite significant progress overall, several regions and sub-regions are struggling, with more than one in four people still chronically undernourished in Sub-Saharan Africa, while Asia as a whole is home to the majority of the hungry, some 526 million people. And while 25 countries have achieved the "more ambitious World Food Summit (WFS) target of halving the number of undernourished people by 2015", the UN said "time has run out on reaching the WFS target at the global level."

While many developing countries are still struggling to improve access to food for the poorest people, bad diets are hampering the battle against malnutrition in others, leading to serious health problems. "Despite considerable improvements over the last two decades, stunting, underweight and micronutrient deficiencies remain stubbornly high, even where availability and access no longer pose problems," the report said.

In Sub-Saharan Africa, hit by political instability, war and civil strife, sluggish income growth, high poverty rates and poor infrastructure have hampered access to the limited food supplies, leading to a prevalence of stunted and underweight children under five. In Asia, the fight against hunger has been helped by improvements in China, Indonesia, Thailand and Vietnam in particular, thanks largely to their rapid economic growth over the past three decades.

But the Caucasus and Central Asia are still exposed to food supply swings or political instability, and on the whole Asia continues to face challenges in how food is consumed, with problematic hygiene conditions and a continuing need to improve dietary quality, the report said.
Last Update: Sep 17, 2014 1:48 am
RELATED TOPICS