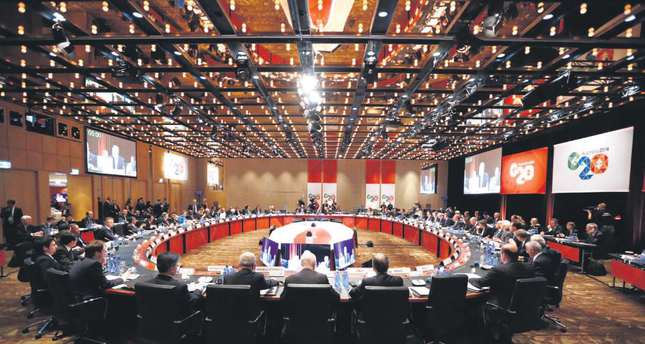 G20 host Australia is leading a push to draw a line under the global financial crisis, urging the group of top economies to swiftly finalize regulations aimed at preventing a repeat of the crash

The Group of 20 finance ministers and central bankers, meeting this weekend in the tropical tourist town of Cairns, risk being drowned out by growing alarm over geopolitical tensions and increased market volatility. "They will do so against a backdrop of downgraded OECD growth forecasts and a deteriorating global political climate," said London-based Lena Komileva, chief economist at G+ Economics.

Indeed, headlines from the G20 will vie with any fallout from Scotland's independence vote on Thursday and ongoing U.S. interest rate speculation that has driven the dollar to six-year highs against the yen. At home, a sweeping counter-terrorism operation across several major Australian cities on Thursday has knocked everything else from the front page.

Yet Treasurer Joe Hockey this week said he and his G20 colleagues are focused on delivering jobs and growth more than ever before. "The changes in the economy over the last few months have made the job harder but it has not diminished our collective resolve," he said. He acknowledged the challenges in attaining the target of bettering the global growth trajectory by 2 percent by 2018, a goal set earlier this year at a similar meeting in Sydney. "Whether we reach the 2 percent or not - the G20 is committed to promoting further growth and to creating more jobs," said Hockey, perhaps suggesting he had already conceded the target was too ambitious.

Complicating the growth agenda, Western nations recently slapped sanctions on some of Russia's biggest firms as punishment over Moscow's role in the Ukraine crisis. Slowing growth in China is also fueling anxiety.

Justin O'Brien, a professor at the University of New South Wales' Centre for Law, Markets and Regulation, said the G20 was losing sight of its core mission of ensuring there was no repeat of the financial crisis.

While there was no shortage of consultation, regulatory initiatives or rhetoric on the progress being made, the reality was that much divergence remained between members. "All battles in regulation happen at the implementation stage and in terms of implementation, there is basically trench warfare taking place," O'Brien said.

Much of the leg work on financial regulation is nearing completion after years of tortuous negotiations. Officials have expressed confidence in concluding agreements on issues such as shadow banking, derivatives and global tax rules by the time of the G20 Leaders Summit in Brisbane in November.

Last week, a draft plan on how much the world's largest banks will have to set aside as safety buffers was circulated and will be discussed at the Cairns meeting. "It is clear that decisive reforms are needed across G20 economies to boost potential output and help ensure that growth is more balanced," Hockey said. "This is why the importance of our efforts this year cannot be understated. Come the Brisbane Summit, every G20 member will present a comprehensive listing of their new policy actions to lift growth and create jobs."