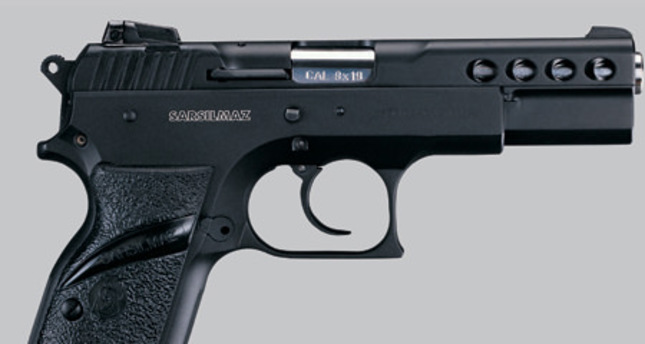 by Hazal Ateş Sep 23, 2014 12:00 am
Turkish pistol manufacturer Sarsılmaz started producing colorful versions of its popular black gun. The guns, which are being produced in various colors including pink, red, yellow, purple and silver are adored by purchasers in the U.S. The colorful guns are mostly preferred by women as well as men in the cities of Florida, Miami and San Francisco.

Saying that their company is the first to produce colored guns, Sarsılmaz Fire Arms Industry CEO Latif Aral Aliş stated that they export between 2,500 and 5,000 colored guns every month, a figure which can go as high as 30,000 on an annual basis. "The average price ranges between $500 (TL 1,122) and $1,000. The U.S. organizes special contests among women who have had weapons training. These contests are held to see which woman can pull her gun out and fire in the quickest.

They are competing against time. Therefore, women do not want to use the standard black guns," Aliş added. Aliş also stated that the U.S. tightened security measures at schools and bullet-proof plates are installed in children's schoolbags instead of banning weapons. "300 million people are living in the U.S. and 285 million of them have guns. Some are buying them in colors that match their cellphones. However, the demand for these weapons isn't as high as it is in the States among Turkish people," he concluded.