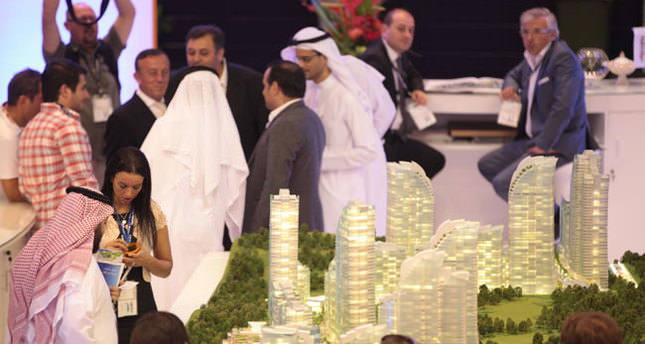 by Daily Sabah Oct 02, 2014 12:00 am
Everything about 2014 Cityscape Global in Dubai seemed bigger than in previous years. The presence of Turkish property firms also continued to grow, with 31 developers and architects from the country taking a total of 2,100-square-meters of space - a 22 percent increase from 2013. During the fair, Turkish firms enjoyed big demand from Middle Eastern investors and will invite them to Turkey to finalize sales.

Cityscape Global is considered the most important real estate event in the region. Turkish construction and real estate businessmen and women who participated in the event agree that the fair was very productive for the Turkish sector. Turkish construction firm Kuzu Grup presented its $2.7 billion (TL 6.17 billion) Sea Pearl project at the fair. The Sea Pearl Ataköy development, which will overlook the Sea of Marmara, will include 1,474 luxury apartments and a five-star hotel with high-end boutiques featuring global brands and restaurants. Kuzu Grup representatives met 400 investors about the project and gained 100 advance reservations. Qatari Diar Real Estate Investment Company announced on Sept. 18 that it is embarking on a new seaside residential project in Istanbul. Kuzu Grup Chairman Özen Kuzu said, "The 100 investors we met said they not only wanted an apartment, but each of them also wanted 30-40 apartments." Another Turkish firm, Dap Yapı, presented its İst Marina project in Dubai as well. The firm has put 500 apartments up for sale, and they already sold 950 apartments during the first phase of the project. Dap Yapı Board Chairman Ziya Yılmaz said: "We will host the investors who show interest in our project in Kartal in Istanbul. They will see the project and decide later." The İst Marina development, which will be built 500 meters from the Kartal coast, will feature 1,474 luxury apartments and a hotel, offices, a hospital and a school. The project will be completed in 2016.

The Ağaoğlu Group, a Turkish firm with investments in large-scale housing projects and wind energy facilities, also attended 2014 Cityscape Global. Ali Ağaoğlu, chairman of the board said: "We attracted great attention during the event as [a member of the] Turkish construction sector. We aim [for] bigger sales compared to previous years." The Ağaoğlu Group invited foreign investors with an "Invest İstanbul" motto. CEO and chairman of The Emirates Group Sheikh Ahmed bin Saeed Al Maktoum and Dubai Mayor Hussein Lootah visited the Ağaoğlu stand. Both of them received information about the projects called Ağaoğlu My Newwork - a finance center project - and Ağaoğlu Maslak 1453. Hasan Rahvalı, CEO of Ağaoğlu Group said: "We took over the İstanbul International Finance Center Project. We will do it with our own resources." The Financial Center is regarded as Ağaoğlu's most important project because it will increase Turkey's share in international capital movement. The project is designed to be the best and the most contemporary financial center in the world. The project will be the center of financial and monetary transactions and is expected to receive much attention from investors in the Gulf region. Ağaoğlu Maslak 1453, consists of a multiple building residential complex on Istanbul's European side.