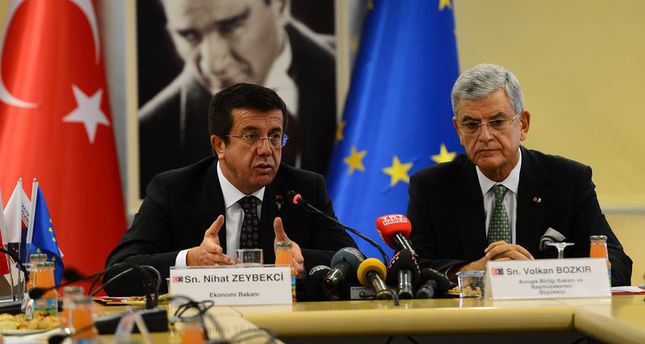 by Daily Sabah Oct 03, 2014 12:00 am
Turkish Economy Minister Nihat Zeybekçi yesterday called for better commercial ties between Turkey and the U.S., criticizing American leadership for not doing everything in their power to make it so before his meeting with U.S. Secretary of Commerce Penny Pritzker. Speaking at a protocol signing ceremony between his ministry and the Ministry of the European Union to boost Turkey's membership efforts, Zeybekci said that Turkey and the U.S. have always been strategic partners. "The U.S. has been a very strategic partner for us and a NATO ally but Turkey and the U.S. have always collaborated with other countries in terms of economy."

Reminding that the EU has been established on the grounds of the Customs Union Agreement, Zeybekci said the relation between Turkey and the EU has taken on a new meaning. "The Customs Union Agreement is highly valuable for Turkey and Turkey has benefitted from the agreement by increasing the quality of its corporate standards. Commercial relations with the EU have already doubled."

Zeybekci highlighted Turkey's concern about the free trade agreements the EU has been signing with various third party countries, especially the ones with large economies. Zeybekci stated that Turkey has concerns about the Trans-Atlantic Trade and Investment Partnership (TTIP) negotiation between the EU and the U.S., which will be completed by 2015 and implemented in 2017. "We have been objecting to this unjust deal since the beginning of this year. We have documented that Turkey is right in its objections and the deal should be upgraded," said Zeybekci and added that the World Bank has examined and issued a report on the matter which has justified Turkey's claims. Even after such evidence few steps have been taken to update the Customs Union deal. Zeybekci said that in this respect both ministries have to cooperate and that the real aim is to improve the advantages provided by the Customs Union to Turkey and prevent the TTIP from possible harming the Turkish economy due to the unrestricted entrance of third party goods. He further said that as the Minister of Economy he will not let that happen.

Zeybekci further stated that the economic maps of the world are changing and Turkey will not be left out. Preceding his upcoming meeting with U.S. Secretary of Commerce Penny Pritzker, Zeybekci said that the main agenda of the meeting will be the TTIP. "Turkey is discomforted by the anti-damping investigations and we have warned them about this. If they try to restrict Turkish exporters and products due to the anti-damping claims then we will issue a restriction. There should be reciprocity, which will be discussed. We believe close partnerships should also be built on mutual economic benefits," said Zeybekci and added that Turkey values its relations with the U.S. and therefore, believes that the strategic partnership should evolve into an economic partnership." Regarding TTIP's sanctions on Turkey, Zeybekci emphasized that if Turkey is left out, then there will be negative consequences for the country. Zeybekci announced that they are currently working on an impact evaluation and added, "Due to the implementation of the TTIP, there will be a risk of third party countries' goods entering into Turkey without using the Customs Union's borders. Thus, Turkey might be invaded economically and commercially by such products." Zeybekci said that Turkish officials are working on formulas such as docking and pay rolling and simultaneous FTAs and added, "If the TTIP that Turkey is still negotiating is implemented, then the only alternative is to mutually discuss and come up with a solution that would prevent the automatic entry of goods into Turkey."

"We told U.S. delegates that Turkey and the U.S. should improve their economic relations instead of getting stuck on strategic and political issues. We believe that a strategic partnership should be constructed on an economic basis," Zeybekçi told. He further noted that U.S. statesmen are aware of Turkey's concerns regarding the TTIP.