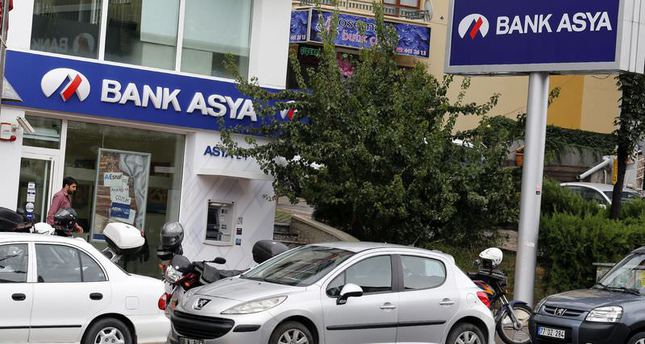 by AA Oct 08, 2014 12:00 am
Bank Asya, which was included in the "Watch List Companies Market" of the Borsa Istanbul, experienced another shock with a new order from the Prime Ministry. After considering the warnings and complaints received, the Prime Ministry Inspection Board has ordered the Banking Regulation and Supervision Agency (BDDK), which had already reprimanded Bank Asya under the auspices of Article 70, to start an investigation into the recently opened dubious deposit accounts and the dividend distribution of Bank Asya. The instruction was also approved by the Turkish Prime Minister Ahmet Davutoğlu.

According to the information obtained from sources in the Prime Ministry, the received claims assert that some executives of the bank had opened deposit accounts of TL 100,000 for themselves in order to secure deposits in case of a confiscation operation.

The complaints delivered to the Prime Ministry's Communication Center also claimed that there was "an illegal dividend distribution and dubious deposit accounts opened for top-level executives." The Prime Ministry Inspection Board was requested to investigate the accuracy of these complaints and whether the procedures were in line with the regulations related with the banking system. In his previous speeches, Davutoğlu had already mentioned that the BDDK was responsible for examining that all banks including Bank Asya act according to the rules of the system and ensuring that the required actions are taken objectively in case a breach is detected.

Bank Asya was the first bank to have its share certificates included in the "Watch List Companies Market" by Borsa Istanbul's Board of Directors. The price of the share certificates of the company fell by 30 percent within three days; therefore, the market value of the bank dropped by TL 252 million; from TL 864 to TL 612 million. Asya Investment and Securities, which made high purchases before the bank was included in the watch list, slowed down its purchases in turn seeing nine months' worth of deposits – equaling TL 5 billion – withdrawn from the bank.

Along with the Prime Ministry Inspection Board, various other boards including the Capital Market Board (SPK) and the Financial Crimes Investigation Board (MASAK) had issued detailed reports on the dubious loans provided to companies that are close to the bank and also the shareholding structure. While all claims regarding various speculative actions and illegal acts were delivered to the BDDK, an increase in the number of loans provided to the shareholders was detected. MASAK has begun inspections into 40 companies including energy companies that obtained loans from Bank Asya recently.