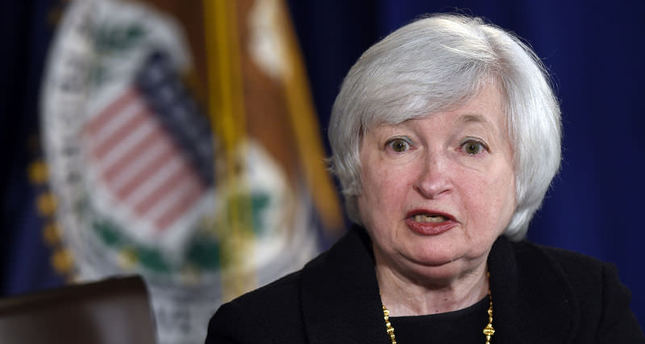 by Oct 08, 2014 12:00 am
Federal Reserve policy makers debated changing their signal on the timing of an interest rate hike, and worried about the strong dollar, minutes of their last meeting showed Wednesday.

"The concern was raised that the reference to 'considerable time' in the current forward guidance could be misunderstood as a commitment rather than as data dependent," the minutes of the July 29-30 meeting of the Federal Open Market Committee said.

However, participants noted that the current formulation of the FOMC's outlook "clearly indicated" that the committee's policy decisions were conditional on its ongoing assessment of progress and expected progress toward the central bank's dual mandate of maximum employment and 2.0 percent inflation.

The FOMC kept the language in its post-meeting statement and Fed Chair Janet Yellen, in a news conference, emphasized that a rate hike would be data-dependent, tamping down her earlier comment that it could come about "six months" after the Fed ends its asset-purchase program, expected after the next FOMC meeting in late October.

Some meeting participants saw the current forward guidance as appropriate in terms of risk-management considerations, "which suggested that it would be prudent to err on the side of patience while awaiting further evidence of sustained progress toward the Committee's goals."

In the view of those officials, under current conditions raising rates could have greater downside shocks to the economy, as it makes a modest recovery, than boost it, the minutes said, because "it would be less problematic to remove accommodation quickly, if doing so becomes necessary, than to add accommodation."

One of the factors for the dovish view were concerns about the stronger dollar amid stuttering economic growth in the eurozone and weaker growth in China and Japan. The greenback in particular had firmed against the euro, the yen and the British pound.

"Some participants expressed concern that the persistent shortfall of economic growth and inflation in the euro area could lead to a further appreciation of the dollar and have adverse effects on the US external sector."

"Several" of them added "that slower economic growth in China or Japan or unanticipated events in the Middle East or Ukraine might pose a similar risk."