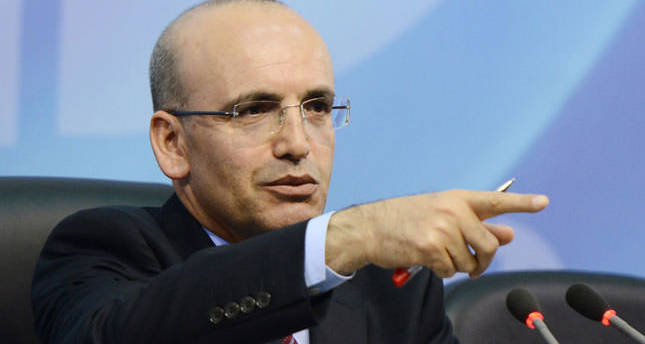 by Daily Sabah with AA Oct 08, 2014 12:00 am
Finance Minister Mehmet Şimşek said that the government will privatize electric plants, highways, some harbors and Erzurum's Winter Olympics Facilities soon, adding that Halk Sigorta and Halk Emeklilik could also be privatized on the condition that their income is transferred to Halkbank. Touching upon a recent meeting with Prime Minister Ahmet Davutoğlu, Şimşek stated that they discussed privatization plans and, as a result of this, they decided to withdraw totally from chance games. Şimşek also remarked that they are planning to transfer state-owned Spor Toto and the Jockey Club of Turkey to the private sector after legal regulations are seen to . He continued, "We are also planning to privatize Halk Sigorta and Halk Emeklilik, provided that their income is transferred to Halkbank. Apart from this, real properties, lands, such important privatization projects as Güllük Marina will be offered to the attention of domestic and international investors. Besides, Turksat's cablecasts, the Petroleum Pipeline Corporation's (BOTAŞ) transmission lines, 49 percent of public shares in the Turkish Electricity Transmission Company (TEİAŞ), the Turkish Petroleum Corporation (TPAO), Haydarpaşa Terminal Restoration Project, the weights and measures service, sulfuric and boric acid plants belonging to Eti Maden are all among our privatization projects.