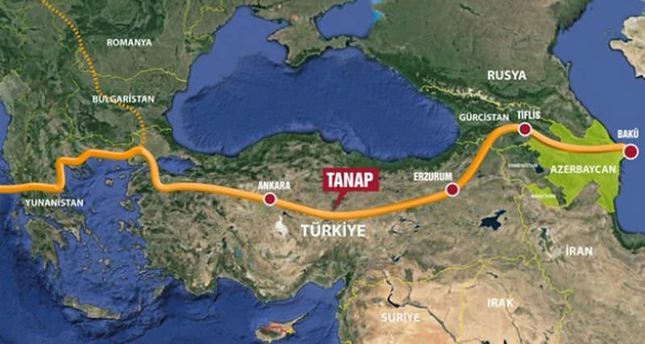 by Daily Sabah Oct 14, 2014 12:00 am
The agreement of Trans Anatolia Natural Gas Pipeline (TANAP) project which intends to transport natural gas from the Shah Sea 2 and other fields in Azerbaijan - and possibly from other neighboring countries - through Turkey to Europe has been signed in Ankara in a ceremony attended by Prime Minister Ahmet Davutoğlu.

"80 percent of the production in TANAP will be carried out by Turkish firms [Tosçelik, Borusan Mannesmann, Erciyas Boru, Emek, Umran ve Noksel], indicating the level Turkish Industry has reached. TANAP project is not only a project of energy but also a huge peace project. Instead of creating energy rivalries we are determined to build cooperation." Davutoğlu said in his speech.