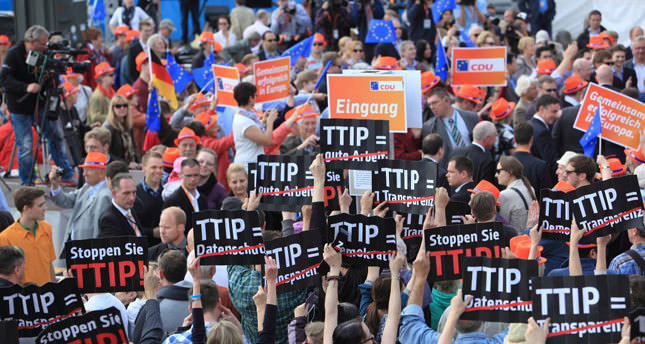 There are rising concerns in Europe over negotiations to liberalize trade with the United States. Demonstrations took place across Europe, with large numbers of events in Germany, France, Spain and Italy over the weekend

Tens of thousands of people were flooding the streets of cities all over Europe on Saturday in mass rallies against a controversial trade agreement between the U.S. and the EU. Talks on the pact, called the Transatlantic Trade and Investment Partnership (TTIP), started last February and, having been mostly held behind closed doors, have raised widespread concerns in the European Union and beyond. Social networks have been mobilized for a mass campaign that has been calling on Europeans and Americans to take action against "the biggest corporate power grab in a decade." One of the organizers of Berlin's demonstration, Michael Efler, told: "We are protesting here against the free trade deal completely negotiated in secret, because they give corporations more rights they've ever had in history." Protests were planned in 22 countries across Europe - marches, rallies and other public events - in over 1,000 locations in UK, France, Germany, Italy, Spain, Greece, Netherlands, Poland, the Czech Republic and Scandinavian countries.

According to the international organization ATTAC, the decentralized Day of Actions unites an unprecedented number of civil society groups and individuals, social movements, trade unions and rights defenders. The main aim of the wave of protests is "to reclaim democracy," which in this case stands for putting an end to the negotiations on three major trade agreements: the EU-US deal (TTIP), the EU-Canada deal (CETA) and the trade in services deal (TISA). A controversial free trade agreement, TTIP is destined to bring down regulatory barriers. Its supporters promise a 100 billion euro (TL 288.5 billion) GDP growth for the EU, and almost $90 billion growth for the US, as well as the creation of over 700,000 extra jobs in the U.S. Opponents of TTIP warn that these figures are too optimistic, however. While cheaper goods and services would deluge the EU, the deal would create environmental problems, a loss of economic sovereignty, and bring torrents of genetically modified food and unemployment, they say. In the U.K., where over a dozen protests are taking place, people fear for the future of the country's public services - the healthcare system, the education system and even the BBC may be susceptible to interference from large U.S. companies. The trade agreement between the E.U. and the U.S. could be finalized by the end of this year.

The leaders of Canada and the EU signed the Comprehensive Economic and Trade Agreement (CETA) this September, which is yet to be finalized. It will remove over 99 percent of tariffs between the two economies by 2016. The Trade in Services Agreement (TiSA) is planned to liberalize the trade of services such as banking and transport between 23 parties, initiated by the US. Its draft version was released this June by WikiLeaks, which was followed by rising criticism.