Silk Road to be reconstructed under modern terms for railways 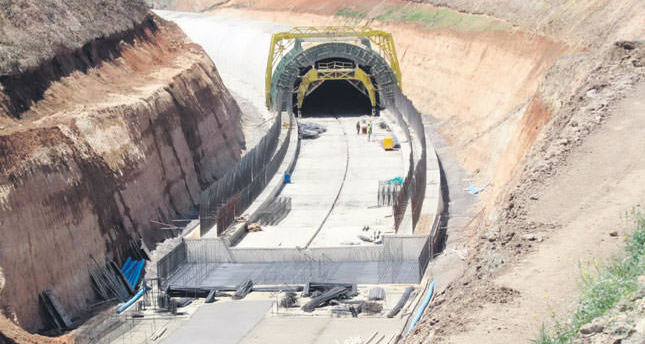 The Minister of Transportation, Maritime and Communication Lütfi Elvan attended the conference Baku-Tbilisi-Kars (BTK) Railway Line – New Opportunities in Developing the Historical Silk Way organized in Azerbaijan's capital, Baku. Speaking at the conference Elvan underlined the historical significance of the BTK project and said, "With the Baku-Tbilisi-Kars Project, we are not just building a railway line on our lands, but also establishing a link of peace and brotherhood. We are all one at heart with the same good intentions on opposite sides of the border."

Underlining the importance of political, economic and social cooperation, Elvan referred to the BTK Railway Line Project as a common development and progress project and said that the line of cooperation and brotherhood should be protected by all the countries involved. "Between 2003 and 2013 about TL 32.5 billion [$14.3 billion] was invested in the railway sector. Our target for 2023 is to renew and modernize 25,000 kilometers of railways, out of which 12,000 kilometers will be ultra-speed and high-speed railways. Ten percent of this current system will serve passenger trains, 15 percent will serve freight trains and all trains will be constructed by Turkish companies," Elvan said. He further added that their goal is to extend the ultra and high-speed railway on the Silk Road route to Edirne in the west and Kars in the east. He further touched on the significance of the Avrasya tunnel, which is the sister project of Marmaray and will pass under the Bosporus and Istanbul's third Airport, which is designed to be one of the most prominent airports in the world, Çandarlı Port in North Aegean and the third Bosporus bridge. "When all these projects are completed, not only Turkey, but Central Asia and the Caucasus's access to Europe will become much easier."

Elvan announced their targets for the transportation industry after the BTK project is completed. He said that currently 83 percent of the project, which involves construction of a 79-kilometer railway with a budget of $700 million, has been completed and that they are planning to finish the part located in Turkey by the end of the year. "This will be an important line for the modern Silk Road. Connecting Central Asia to Turkey over the Caspian Sea and from here to Europe through the Marmaray project will ensure that there is easier, safer and quicker transportation between Central Asia and Europe. The transportation infrastructure of the countries in the region will also be linked together. Central Asian countries will have fast transportation links between themselves with the implementation of this project. The Baku-Tbilisi-Kars project, which is an important and supplementary part of the East-West transportation corridor, will unite Azerbaijan, Georgia and Turkey and also will ensure that the Aktau Port in Kazakhstan and Türkmenbaşı Port in Turkmenistan gain more strategic value in the corridor. China will be connected to Europe over the Caspian Sea region, Central Asia and Turkey. This will ensure economic progress and development and also cultural relations between the countries will improve," said Elvan.