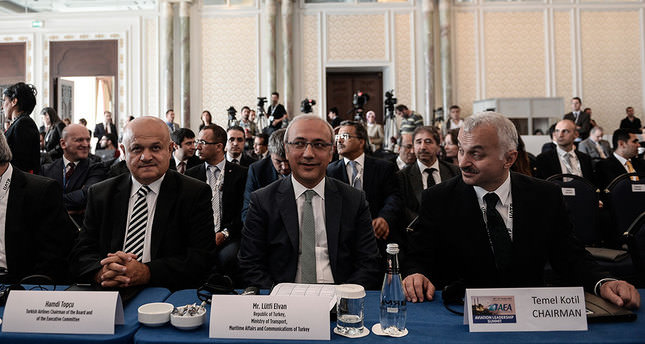 by AA Oct 17, 2014 12:00 am
Turkey's aviation sector aims to carry around 170 million domestic and international passengers by the end of 2014, the country's transport minister has told an Istanbul aviation conference.

Speaking on Friday at the "Aviation Leadership Summit" of the Association of European Airlines, Lütfi Elvan noted that Turkey's share of air passengers increased to 2.4 percent globally and to 8.7 percent in Europe in 2013, saying they expected "the number of air passengers to increase up to 167 million at the end of this year."

Even more passengers will use Istanbul as a hub, the minister said, with the opening of the third airport on October 29, 2017.

Turkish civil aviation-sector growth is above the European average, Elvan said, adding that Turkey broke records in developing its flight network via dual agreements over the last 11 years, increasing the number of agreed countries from 81 to 162.

Saying that in 2003 Turkey ranked seventh in a list of European countries by air passenger numbers with 151 million travelers, Elvan told the conference that the country now ranked fifth.

Another attendee, Turkey's deputy Europe minister Alaattin Büyükkaya, stated that the target of EU membership was one of the main motivations for the country's transport policies and for taking decisions to combine safety, security and comfort.

The summit will continue with discussion panels on shaping Europe's aviation policy and wide-ranging debates on current aviation topics, attended by representatives from the 30 most prominent AEA members as well as politicians from the EU and leading figures from the aviation sector.