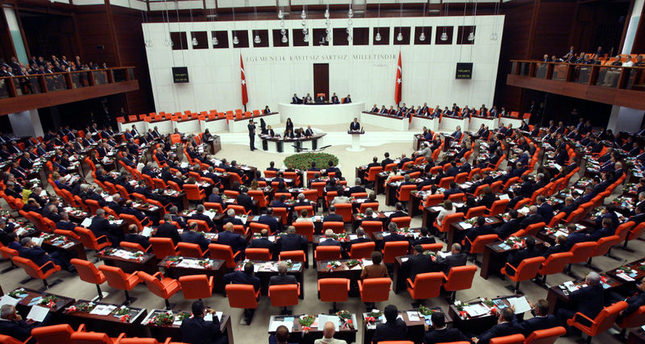 A 60-article bill regulating the terms and conditions of transferring the shares of the General Directorate of Foundations in Vakıfbank to the Treasury aiming to expedite the resolution process of banks that have been transferred to the Saving Deposit Insurance Fund (TMSF) has been submitted to the Turkish Parliament.

According to the bill, the Banking Regulation and Supervision Agency (BDDK) will be immediately informed before an investigation into a bank's affairs is commenced. The investigation report will be submitted to the BDDK by the Competition Watchdog to obtain the BDDK's opinions and remarks. TMSF will be authorized to transfer any assets and liabilities and part or all of the rights and receivables of banks from which the operation authorization has been withdrawn as a result of contracts and codes to any currently operating bank or banks that will be established by the TMSF.

Exactly 58.5 percent of (A) and (B) groups' shares represented and administrated by the General Directorate of Foundations among Vakıflar Bank's shares will be transferred to the Treasury. Staff that is employed by public institutions would be assigned to international organizations with headquarters or representative offices in Turkey.

The bill has been presented to the presidency of the Turkish Parliament for possible amendments in the banking code, while other various laws and the statutory decrees also ensure that the TSMF will be able to grant loans not only to corporations but to all real and juridical persons.

The bill also proposes that receivables not registered as deposits at Türkiye Emlak Bankası are paid to depositors without recording it with the order table of the liquidation board. Furthermore, the measures, levies, sequestration and all other similar administrative and judiciary claims on the individual pension accounts of participants will be carried out by the related pension companies. The bill also bans any kind of lockouts and strikes in printing and distribution services of the Official Gazette of Turkey and increases the minimum limit for penalties imposed for misuse of information and fraud in capital markets from two years to three years. Other articles of the bill suggest insurance companies, reinsurance companies and all other pension companies established in accordance with the Individual Pension Savings and Investment System Law become members of the Turkish Insurance, Reinsurance and Pension Companies Union. Additionally, insurance experts will no longer be able to turn down any kind of business that is offered to them. The resolutions of ministers of the Undersecretariat of Treasury on procedures carried out by the association's organs will be strictly implemented. Any association organs that do not directly implement such resolutions without any legal excuse will be discharged immediately upon the demand of the related minister or the public prosecutor.

According to the bill, the minister who is controlling the Undersecretariat of Treasury will be able to cease the duties of the association if it is necessary to prevent any crime or to ensure the termination of an ongoing crime committed against national security or public order. Shares of Borsa Istanbul A.Ş. may also be transferred upon the approval of the Board to various other stock exchanges, markets or system administrators provided that technology, technical know-how and competency are transferred to the related parties in order to establish strategic partnerships. The provision "the Chairman of the Board of Directors of Borsa Istanbul Anonim Şirketi is authorized to transfer, administer and represent and bind the company in the most extensive manner possible" will be revoked and the structure of the board of directors in small and medium-sized enterprises will be rearranged by providing the opportunity for the chairman to be elected from among the members of the board of directors, including the general manager, if the bill is accepted.