Turkey's Presidential Palace Debate and What You're Not Supposed to Know 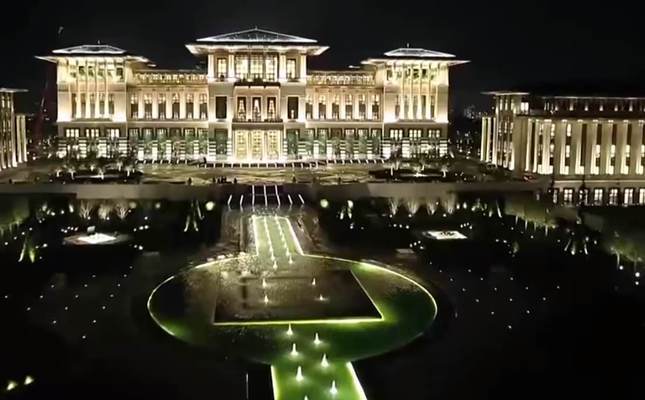 by Taha Meli Arvas Nov 07, 2014 12:00 am
As a native English speaker, I watch and read the news in English, American-English to be precise. Reading or listening to news in Turkish requires translation at times and for practical purposes I follow the "foreign press" to get my daily news. Although it's sometimes nice to get a foreign perspective on domestic issues, I've noticed something strange happening recently that may make me regret this decision.

The current "it" story for foreign press reporters in Turkey has been the "Presidential Palace debate." Although the story didn't get much traction in Turkey, yesterday I read a take-down piece so cringe-worthy and hyperbolic I had to respond by writing this column. Many "foreign press" reporters have taken up the "Palace" story with the same angle, same conclusions: "The Palace" is too big, too expensive, excessive, and unnecessary. As an economist, I couldn't get away with making such generalizations without some sort of proof and neither should they. So I decided to do some research and present my findings here. Let's talk about "the what" and "the how" and I'll present my hypothesis for "the why" at the end of the column.

Let me cut to the chase by giving you my opinion up front. Discussing the nominal cost of a good, whether it be a pair of tires, a new suit, a pair of shoes or a toy is for the uneducated. The relevant figure is what the return on investment will be. I will buy a more expensive pair of shoes, a more expensive car, even a more expensive house if it will last longer or yield more per dollar spent than a cheaper good. This is how rational consumers act. This is how the palace should be judged and we'll do the math here shortly.

Before we proceed, let's address the elephant in the room first. A fact that Bloomberg, The New York Times, Wall Street Journal, CNN, and nearly every other news outlet has misrepresented through omission. Some have omitted this because of lazy journalism and some appear to have omitted it purposefully and with malice. It is something glaring and obvious. A fact, the omission of which is great for the anti-government crowd but by lack presence destroys one of their main arguments. They argue, "Only a King would build a 'Palace'."

Admittedly, this name was weird for me at first too. The name Presidential Palace is something of an oxymoron. How can an elected official (Erdogan is the first by the way, all other Presidents came to power by coups or by Parliamentary election) live in a palace. Any Turk will shed light on the topic when you ask them a different question: "Where does President Obama live?" The answer is always "at the White Palace (Beyaz Saray in Turkish,) of course." The term "White House" does not exist in Turkey. Presidents live in palaces. "Courthouses" don't exist either; Justice Palaces are where court proceedings are held. The term "palace" is used in Turkish for any major government building. A term which is a remnant, perhaps, of a nation that was once an empire, but every New York Times, Wall Street Journal, CNN, Economist, and Bloomberg News reporter who lives and works in Turkey knows this. If their colleagues at their headquarters are too lazy to research this fact, they are negligent for not pointing it out and relaying it on to their readers.

Now let's do some math (fun math, I promise.) The cost of the Monarchy for the citizens of the United Kingdom is approximately $0.70 per person. The return on this investment has been widely calculated to be at least $250 per person per year. Obviously the Monarchy is big business and a profitable one. Even those that may oppose the "perceived excesses" of Her Royal Highness may regret abolishing it when they realize the tax-base will shrink and their personal tax bill will increase.

Bringing up the British Monarchy when talking about President Erdoğan is normally a cheap-shot taken by his critics but the math works here. Okay, so let's turn to a country known for abolishing its monarchy and building a democracy, perhaps the most successful of democracies, the United States. There can't be such excessive spending in a country known for established democratic institutions, right?

Let's review these assertions. The article fails to point out that the Cankaya Palace was built during a time of incredible poverty and destitution in Turkey; that the Cankaya Palace actually cost much more to the government at the time (as a percentage of the total budget) than did this residence; and that Atatürk hated the Cankaya Palace. In fact Ataturk hated Ankara. By all accounts he spent nearly all of his time in Istanbul during his last decade in power (returning for official holidays only) and died in a palace built by the Ottomans for the Sultan at the time.

It further fails to point out that the "one-thousand rooms" in the palace are actually offices in a government compound. This "palace" is not meant primarily to be a residence for President Erdoğan and his family; it is meant to consolidate the various ministries and government buildings in Ankara. Currently, government buildings (built by previous administrations) are littered throughout the capital arbitrarily leading to unnecessary pollution and nightmarish traffic congestion. The palace is actually a government compound which will ultimately house much of the ministerial bureaucracy of Ankara and which will greatly reduce traffic and pollution. A more secure zone will lead to cost savings by eliminating overlapping security details and procedures.

For the sake of argument let's assume that the palace actually had no practical application. That it literally was used only to house The First Family. So what? The Bloomberg News article fails to point out that the annual budget for transportation of and service to President Obama and his First Family is $1.4 billion. The cost of operating Air Force One alone during President Obama's presidency has been $1.3 billion. As an American tax payer, I say, "great that's a bargain." The White House and Air Force One are symbols of America's mite and economic strength. The more grandiose the better as long as their grandiosity can be monetized and they are.

The Presidential Palace will bolster Turkey's image. It will be the center for conferences and events and it will be often used to greet foreign business delegations. It will be much more to Turkey than The White House is to America.

Could one government compound be so useful? Could its impact be so great that it would pay for itself in one year? As a country that has a total outstanding bond debt of a little under $200 billion (six-year average term, four-year duration) what percentage decrease in cost of borrowing (interest rate) would be great enough to cover the cost of this palace? The answer is seven basis points or 0.07 percent. In other words, if you were willing to lend the Turkish government money at an interest rate of seven percent, would the presence of this government compound, a symbol of Turkey's strength and prosperity, persuade you to lend at 6.93 percent? I think so. The point is that perception is important and here's where we get to "the why?"

Why would these news outlets omit such important details for their readers? Why do they all write the same stories with the same prejudices? Most of these journalists are elite Turks. They come from the other side of the train tracks. They can't stand to see Erdoğan as president, much less live in a Presidential Palace. They grew-up speaking Afrikaans, not the language that Erdoğan and the other "Black Turks" speak. They have access to the networks necessary to get them into these foreign news outlets and already share the anti- Erdoğan mindset that the hiring editorial boards demand. To be fair, I don't detect similar obvious biases in these media outlets' non-Turkey reporting, but the old-guard love-affair they have going on in Turkey is so palpable and is certainly so blatant in this specific debate that it gets me questioning whether or not they are biased overall and that I'm just too naïve to know better when it comes to different issues.