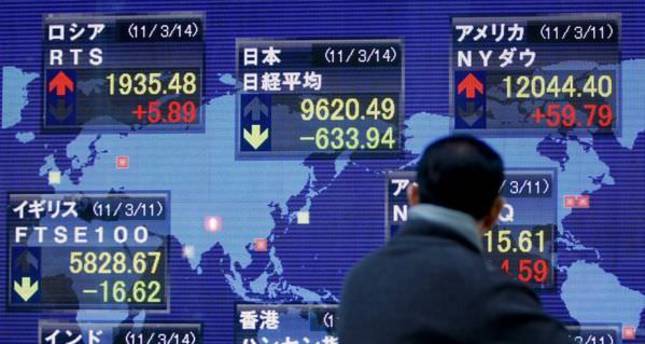 by Cameron Thomas
Nov 13, 2014 12:00 am
Continuing its bullish stance, Japan's Nikkei 225 rose 0.4 percent yesterday reaching a zenith it hasn't seen since October 2007 after an official announcement that Prime Minister Abe's administration is preparing for an election next month.

The Nikkei 225 moved higher again yesterday, edging up 0.4 percent after a 2.1 percent jump on Tuesday amid rumblings that Prime Minister Shinzo Abe will delay a sales-tax hike and call an election in December. "Calling a snap election within this year is among my options," Abe told senior party members, the leading business daily Nikkei reported. The prime minister's comments were supported by Japanese government spokesman Yoshihide Suga who said it was up to Abe to decide on whether a snap election will be called. However, the rumor mill intensified after a top government official told the Wall Street Journal that Abe's aides were preparing for an election next month and that it would likely take place on Dec. 14 or Dec. 21. "We want to seek a mandate to push ahead with Abenomics, with the growth policy," the official told WSJ, adding the caveat that the election decision isn't final. Speculation suggests that the move for early elections is an effort from the Abe administration to shore up support and consolidate its economic stimulus program, which was massively expanded on Oct. 31 after the government announced it would make annual asset purchases of 80 trillion yen, up from its original 60-70 trillion yen target range.

Last month's positive inflation data signaled to markets that the government's massive asset purchasing program is gaining traction however, these improvements could be quickly reversed in the event of a premature increase in the national sales tax - which is expected to rise from the current 8 percent to 10 percent in October 2015. Clamoring markets also saw the yen gain ground against the dollar yesterday when the dollar retreated 0.4 percent to 115.35 yen after reaching a seven-year peak of 116 yen in early trade. "The Nikkei backed off from highs and so has [sic] dollar/yen," said Jeremy Stretch, head of currency strategy at CIBC World Markets, to Reuters news agency. "A snap election is likely to generate greater support for Abe and his policies and keep the bias for yen weakness." Masayuki Doshida, a senior market analyst at Rakuten Securities, suggested that rumors that the sales-tax will be pushed back will almost certainly cause volatility in currency markets, which will furthermore translate into stock market volatility. The expansion of Abe's stimulus program was well-timed, according to reactions from markets, initiated soon after the Federal Reserve ended its bond-buying spree in order to spur domestic growth and attract the attention of foreign investors. The liquidity provided by the Bank of Japan is expected to pull the economy away from deflation and increase access to credit in order to create a sturdy foundation and expand the country's tax base - a necessary move for the government's sales tax to be effective and bring Abe's fiscal house under control.