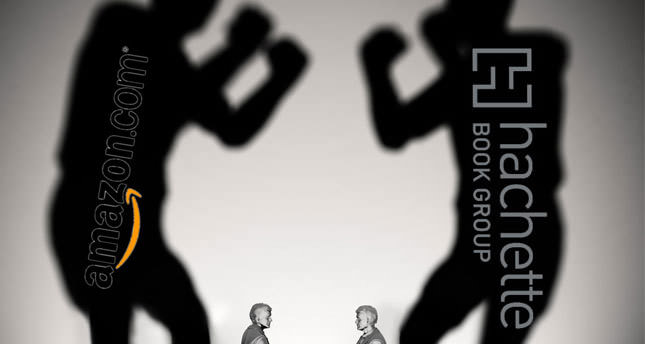 by Associated Press
Nov 14, 2014 12:00 am
One of publishing's nastiest, most high-profile conflicts, the monthslong standoff between Amazon.com and Hachette Book Group, is ending. Amazon and Hachette announced a multiyear agreement Thursday. With e-book revenues reportedly the key issue, Amazon had removed pre-order tags for Hachette books, reduced discounts and slowed deliveries, hurdles that should be gone well before the crucial holiday shopping season. "This is great news for writers," Hachette CEO Michael Pietsch said in a statement. "The new agreement will benefit Hachette authors for years to come. It gives Hachette enormous marketing capability with one of our most important bookselling partners." David Naggar, an Amazon vice president, said the company was pleased that the deal "includes specific financial incentives for Hachette to deliver lower prices, which we believe will be a great win for readers and authors alike."

The agreement takes effect early next year. Restrictions on Hachette books are being lifted immediately, according to the announcement, although delays on Carlos Santana's "The Universal Tone," J.D. Salinger's "Nine Stories" and other works remained in place several hours after the news broke.

The Amazon-Hachette dispute had filled publishing headlines and conversations for much of the year. James Patterson, John Green and hundreds of authors from various publishers had condemned Amazon, and Hachette author Stephen Colbert mocked the online retailer.

Meanwhile, Hugh Howey, J.A. Konrath and other writers published by Amazon had blamed Hachette and praised Amazon for keeping prices down and allowing authors unhappy with traditional publishers to release their work elsewhere. Later Thursday, Hachette's corporate parent, Lagardere, issued an earnings report showing an 18.5 percent sales decline for Hachette in the third quarter and blaming "punitive measures" by Amazon for a drop in the U.S. market share of e-books for adult trade releases. Amazon, the country's leading bookseller and dominant e-book seller, issued a disappointing earnings report last month, although the impact of Hachette books was unclear. Douglas Preston, a Hachette writer who had organized a public campaign against Amazon, wrote in an email Thursday that he was relieved by the news and hoped that "if disagreements arise in the future between Amazon and publishers, Amazon will never again seek to gain leverage by sanctioning books and hurting authors." Howey called Thursday's announcement "great news" and wrote in an email that he was "glad Hachette stopped this crazy campaign which only hurt itself and its authors." Hachette was among five publishers sued in 2012 by the U.S. Justice Department for allegedly fixing e-book prices. The publishers, who had worried that Amazon was charging too little for e-books, settled and were required to negotiate new deals with Amazon and other retailers. Under the new agreement, Hachette will set prices for e-books, "and will also benefit from better terms when it delivers lower prices for readers."