Crimean depositors ask: Where has our money gone? 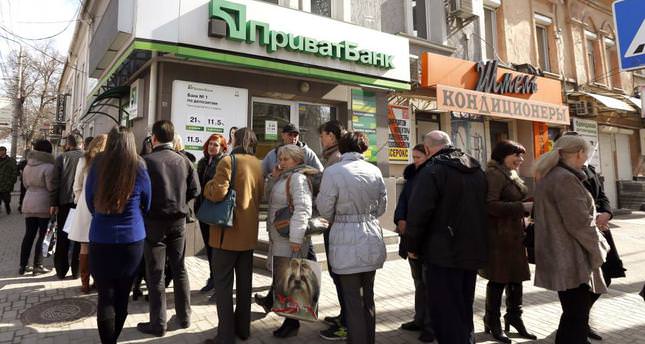 by reuters Nov 21, 2014 12:00 am
Outside a high-rise building on the outskirts of this disputed region's capital, a steady stream of frustrated residents exit a government office, clutching folders of bank records and shaking their heads in disgust. "They are not returning the money," complained Margarita Pobudilova, a 77-year-old retired factory worker who has been unable to access more than $3,000 of her life savings for months.

Ten months after Russia invaded this Black Sea peninsula and seized it from Ukraine, the financial fallout is still being felt. Thousands of ordinary citizens have little or no access to their funds. Losses for Ukrainian banks continue to mount as billions of dollars worth of loans they issued in Crimea go unpaid. Lawyers for the banks are preparing legal actions against Russia, which confiscated many of the banks' buildings, equipment and cash. Meanwhile, Crimea has been thrust into a kind of technological time warp: Most ATMs no longer accept non-Russian bank cards; foreign credit cards can't be used to buy things. Most non-local mobile phones can't receive a signal. And even if they could, calling other Crimeans is complicated: Most of the peninsula's residents recently had to get new mobile phone numbers because Ukrainian services were cut off.

The banking and phone chaos are another front in the conflict between Ukraine and Russia. In Crimea, which has been part of Ukraine for 60 years, Russia has basically blown up the existing banking system, forcing Ukrainian banks to close, banning the Ukrainian currency and replacing the region's retail banking network almost overnight. The resulting economic turmoil has shuttered some businesses and complicated life for thousands, forcing people to deal with a Kafkaesque bureaucracy to try to get their money returned.

For all the havoc Russian President Vladimir Putin's conquest has caused, many living here don't blame him for their hardship. In interviews, residents accused Ukrainian banks and the government in Kiev of stealing their money. That distrust indicates - at least for now - a victory for Russia in the propaganda war and suggests that Kiev's chances of regaining the peninsula soon are slim.

The international community has condemned Russia's annexation of Crimea, with the United States and the European Union imposing economic sanctions on Russian individuals, companies and banks. Russia has retaliated with its own sanctions and support for pro-Russian separatists in eastern Ukraine. Andriy Pyshnyy is chairman of the management board of Ukraine's state-owned Oschadbank, which until March had 296 branches in Crimea. He described how one day they were taken over by Russian banks. "In the evening (our) outlets work," he said. "In the morning, a new bank is opened and just the name is changed to RNCB Bank." Russian National Commercial Bank is one of at least 30 Russian banks that have rushed in to fill Crimea's financial vacuum.

Many in Crimea - where average monthly wages last year were less than $400 - still can't access their Ukrainian bank accounts. The situation was exacerbated in April when Putin offered Crimeans who had leased their cars through Privatbank, Ukraine's largest bank, some unusual financial advice. Toward the end of a live television broadcast in which Putin answered viewers' questions, he dipped his hand into a folder and read out this one: "I hired a car on lease from Privatbank. It will take me only two years to repay the loan," he said. "Privatbank no longer operates in Crimea. What am I supposed to do?" The president's answer: "Please use the car and don't worry."

In any case, following Putin's suggestion, thousands of individuals and companies that had borrowed money from Ukrainian banks stopped repaying their loans. In all, Ukrainian banks had loaned Crimean businesses and individuals about $1.8 billion at the time Crimea was annexed, according to Ukraine's central bank.

Pyshnyy of Oschadbank says "99.99 percent" of its loans in Crimea - which totalled more than $500 million - are now delinquent. The surge in bad loans has made it more difficult for Ukrainian banks to repay Crimean depositors, according to an official with Ukraine's central bank. The fact that the Russians also seized many of their branch offices and records didn't help, either. "To function properly, we need ... access to our branch network, our outlets, our ATMs, to our documents, our files," Pyshnyy said.