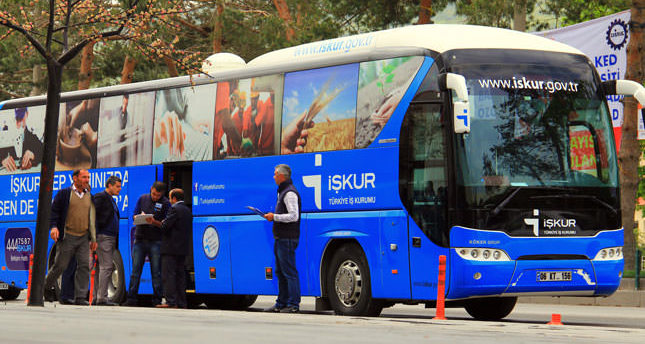 by Daily Sabah Nov 25, 2014 12:00 am
According to information gathered by the Turkish Employment Organization (İŞKUR), the number of Turkish workers sent abroad by the agency since 2008 is on the decline. While the number of workers employed abroad through the agency was 13,645 in 2000, the number reached 81,379 in 2006. Since 2008, the number has been declining, stabilizing at around 50,000. Last year there were approximately 55,369 workers employed and in the first 10 months of this year, the figure dropped by 27 percent to 33,863, compared to last year's figures.

A total of 7,652 workers have been placed in various jobs in Russia in the first 10 months of the year by the agency and while there has been a 35 percent decline when compared to last year, Russia still remained top of the list. While Iraq was the country that employed the highest amount of Turkish workers within the last three years, the figured dropped by 51 percent this year, yet Iraq still came second on the list with 6,598 Turkish workers employed. The number of Turkish workers placed in jobs in Kazakhstan boomed in 2014, increasing by 257 percent, reaching 1,784. Libya claimed Russia's previous title as the country with the highest number of Turkish workers employed in 2009 with 13,578 workers and maintained this title until 2010.