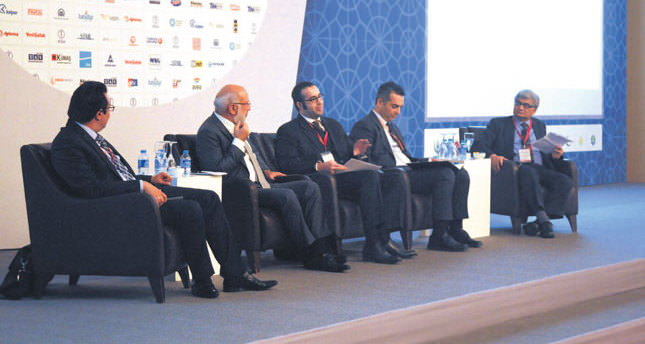 The 18th annual Islamic Business Forum (IBF) Congress commenced yesterday at the WOW Convention Center in unison with the 15th annual Muslim Businessmen's and Industrialists' Association (MUSIAD) International Fair, the 30th COMCEC Summit and the fourth Palestinian Business Forum under the patronage of the Turkish government. The congress was inaugurated with an opening speech from IBF President Erol Yarar who briefly outlined the topics of discussion for the two-day event as well as emphasized the need for unity and coordination among Organization of Islamic Cooperation (OIC) member countries and the bourgeoning Islamic finance industry.

Islamic Development Bank President AhThe keynote speaker and editor of the Islamic Banker Magazine, Mushtak Parker, briefly described the contours of the 18th congress. Parker, a South African graduate of the London School of Economics, has over 30 years of experience in Islamic finance, conventional finance, governance, commodities and consultancy.

Surveying the current trends in the Islamic financial industry, the post-global financial crisis (GFE) atmosphere and the role ratings agencies play in the legitimization of financial instruments, Parker stressed that good governance and sound regulatory legislation are the fulcrum point for the proliferation of the Islamic finance sector. "What drives regulation? Its financial innovation," Parker said, emphasizing that OIC countries need to improve the bilateral relationship between legislative bodies and bank boards.

PAccording to the 2012 Global Islamic Finance Report, $1.34 trillion worth of assets were Sharia compliant two years ago. Speakers at the congress consistently made reference to the growing popularity of sukuk - Islamic bonds that offer rent profits from real goods or markets as opposed to interest - in global trade, which has today seen issuances by non-Muslim countries from the U.K., South Africa and Hong Kong. In Malaysia - the largest Islamic financial asset market in the world - sukuk accounted for 60 percent of bond issuances in the first half of 2014.

The main panel of the congress titled "Allocation of resources in Islamic countries: Efficiency and productivity approach" featured four prominent panelists from multiple institutions affiliated with the OIC and Islamic finance. The panelists included Director of the World Bank Global Center for Islamic Finance, Zamir Igbal, Chairman of the Capital Markets Board of Turkey, Vahdettin Ertas, Chairman of BAB Group, Ali Bayramoglu and Manager of the Investments Division of the Treasury Department of the IDB, Abdullah Karatas, who elaborated on numerous approaches to enhance efficiency in distrusting resources in OIC countries while espousing Islamic banks and private sector businesses as key engines in growth and allocation.

Igbal highlighted that 1.6 billion people (23 percent of the world's population) live in OIC countries, which represent 42 percent of global oil production (35 million barrels per day). Yet, OIC countries together only contribute 10 percent to the global economy. "This highlights the need for industrial development in the OIC in order to realize their potential in a much more effective way," Igbal said, adding that only 16 percent of global private sector investment takes place in OIC countries, to which he remarked, "Muslim countries can do better."

Karatas, the third panelist, said, "From the perspective of the economy, mobilizing funds through innovative signaling is just as important as technological creativity - these two things feed each other. Property rights and the rule of law are the fundamental factors - even Ibn Khaldun highlighted that these two things were the linchpin upon which an economy is based on."

Karatas also added that with the right system, getting a five or 10-year line of credit from major financial institutions should be very achievable.

Tomorrow's IBF will host professionals, academics and administration officials from various countries who will deliver a series of country presentations. Keynote speakers from the Islamic Development Bank (IDB) Group and the International Islamic Trade Finance Corporation will also make appearances.