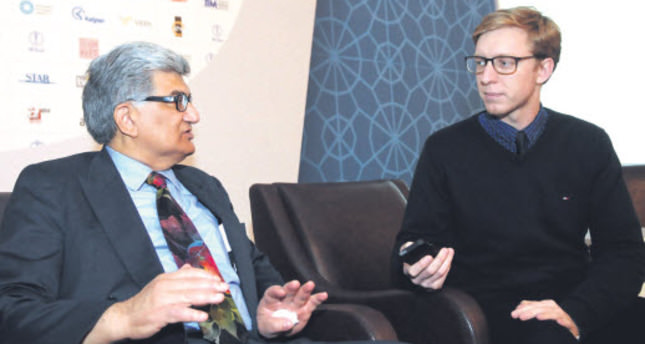 Speaking to Daily Sabah after moderating the panel of the 18th International Business Forum Congress's first session titled, "Allocation of Resources in Islamic Countries: Efficiency and Productivity Approach," the editor of Islamic Banker Magazine, Mushtak Parker, divulged some of the more nuanced issues Organization of Islamic Cooperation (OIC) countries face regarding growth and development. He also described the role played by Islamic banking and finance and the private sector in spurring institutional change and investment.

Daily Sabah: In the panel, I sense you mainly focused on the role of the private sector's involvement with Islamic banking and finance. In your keynote speech, you touched on the role of the government in so far as legislation and regulation is concerned and you also mentioned some governments are now issuing Sharia compliant bonds on the overnight market for Islamic banks. Do you see more capacity for public sector involvement apart from this?

Mushtak Parker: To be very honest, the simple answer is yes. Even the private sector is regulated by the government who sets the rules of the game. There is a correlation between the proactiveness of governments in an economy and the actual performance of that particular sector. So, if you have much greater public policy engagement by the government or government agencies in Islamic finance, I think it is inevitable to see a much greater outcome for Islamic finance in terms of meeting economic goals, contributing to GDP growth and greater liquidity. In many Muslim countries, this level of proactiveness from governments and public policy makers is not enough and this is a major deficit in contemporary development. There are some exceptional examples such as Malaysia and Turkey, although as I mentioned earlier [during the keynote speech], participation banking started in both countries in the same year [1983]. And if you look at the size of the market and the proactiveness of the government, there is huge gap. But over recent years in Muslim countries, there has been great improvement in banking, regulation and capital markets.

DS: In October conventional banks began recieving interest on their lira reserves in an effort to spur growth in the sector. This move ostracized the Islamic banking sector, which is obviously forbidden from receiving such incentives. How important is it to create an environment where Islamic banks can be competitive and what tools can Muslim countries use to implement this?

MP: First of all, creating a level playing field for equivalent products is very important because otherwise you will have one sector with larger advantages than the other. Now, if a non-Muslim country like the U.K. can do that, then why can't the Muslim countries? I mean, the U.K. has a double stamp duty for real estate-based transactions, but they have removed this requirement for Islamic banks especially the "ijara" [leasing transactions] because they realized the nature of the product has got the same economic objective as a conventional product. By the very nature of the ijara, you have two transactions already, so that was deemed as unfair by the British government. There are other examples too like Hong Kong, Singapore, South Africa and Luxembourg, so it is actually a shame for Muslim countries that do not have such frameworks. A level playing field is very important because if you want to advance Islamic finance, it cannot be at a tax deficit. Having said that, some countries like Malaysia have gone the other way and given tax incentives, which is essentially a subsidy.

Mushtak Parker is the editor of Islamic Banker Magazine with over 30 years experience in consultancy. Parker is a graduate of the London School of Economics and the CEO of Mushtak Parker Associates, a South Africa-based research consultancy firm specializing in finance, Islamic finance, economics and governance. Parker was a correspondent for the Financial Times for 14 years as well as a contributor to The Guardian, The Observer, The Independent, Newsweek, Institutional Investor, The Times, London Evening Standard, Business Day, New Straits Times, The Diplomat, The Middle East, Middle East International, Emerging Markets and the Economist Intelligence Unit.