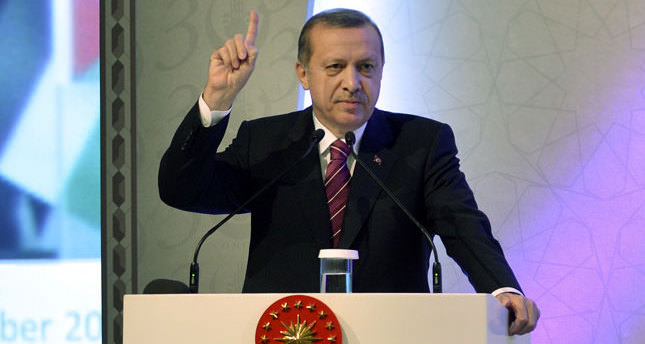 President Erdoğan emphasizes the importance of the OIC’s Preferential Trade System, will be implemented as soon as possible at the 30th Anniversary of COMCEC in Istanbul

President Recep Tayyip Erdoğan, speaking at the 30th Anniversary of the Standing Committee for Economic and Commercial Cooperation of the Organization of Islamic Cooperation (COMCEC) held at the Istanbul Congress Center yesterday, reminded that COMCEC's biggest trade project, the OIC's Preferential Trade System, was awaiting implementation for more than 20 years. Erdoğan asked all member countries to immediately take the required steps to implement the Preferential Trade System and since the legal ground for the system was completed in 2011, there are only a few steps left to be taken in order to implement the arrangement.

"If we don't implement this system between OIC countries, who else can we work with?" said Erdoğan.

Erdoğan emphasized that the strategy of COMCEC, which was established and implemented last year, required all member countries to be actively involved in all efforts undertaken by the committee. After the principles and targets of the strategy have been determined, the relevant institutions of all member countries are expected to assume a leading position and be supportive of each other. Erdoğan further requested active participation from all established working groups in order to ensure cooperation and that all the related ministries of member countries take part in the effort begun by the committee. Erdoğan also touched on the importance of the Islamic Countries Standards and Metrology Institute, another important project of COMCEC in terms of trade, saying that he was glad that the number of members of the institute was increasing on a daily basis and that now the corporate structure has been established. He further requested the support provided by member countries to continue increasingly.

Stating that COMCEC has had a great deal of importance in financing trade since its foundation, Erdoğan said that while the OIC has played a significant role in increasing internal trade from 10 percent 15 years ago to 18 percent in 2013. Erdoğan further added that such an increase was still not enough. Erdoğan further stated that while the financing provided for trade by the Islamic International Trade Financing Company and the work done by the Islamic Development Bank has increased, it was not at an adequate level. "While I congratulate both institutions for their hard work, I still have to express that these efforts are not enough. COMCEC has performed important work in terms of financial cooperation together with the active participation of sector representatives and the related institutions of member countries. The Stock Exchange Markets Forum, the COMCEC Capital Markets Regulatory Institutions Forum, central banks and the meetings of monetary authorities have all been successful. I believe the COMCEC Stock Exchange Index, which is one of the best results achieved by the Stock Exchange Markets Forum, will contribute a great deal to the capital inflow to member states in the near future," Erdoğan said.

Establishing an "Immovable Property Exchange Market" along with COMCEC's Stock Exchange Market was one of the suggestions of Erdoğan who further touched on the importance of immovable property markets. "COMCEC should also focus on gold exchange since gold apparently has a more important role than valuable paper. The legal structure required should be examined; international laws should be studied. All member countries and related associations should take steps in order to establish a legal, fair market. If this index has an active role, I believe this will bring active investments. Therefore, such efforts will definitely be supported," said Erdoğan.
Last Update: Nov 28, 2014 1:33 am