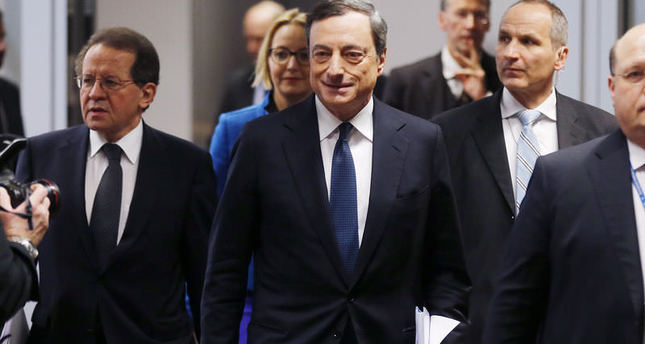 The European Central Bank is under fire in Germany because of its negative interest rates policy, which is prompting some banks to charge customers for holding money in their bank accounts

In Germany, where saving is considered a virtue, the announcement by one of the country's biggest lenders, Commerzbank, that it will start charging clients with high deposits to their accounts has angered many.

Commerzbank insists that mom-and-pop retail customers will not be affected and the so-called "deposit fees" will be levied only on major corporate clients holding more than 10 million euros ($12.5 million) on their accounts.

Nevertheless, at a time when savers in particular are already feeling the pinch from an extended period of ultra-low interest rates, Commerzbank's move "broke a taboo," complained the television news channel N-TV.

Some observers think it is only a matter of time before private retail customers are hit, too.
The idea behind the ECB's unprecedented decision in June to take eurozone borrowing costs into negative territory was to boost lending in the euro area. In a bank-based economy such as the single currency area, the chronically low level of credit is regarded as the main hurdle to a broader recovery. So, the ECB decided to lower the rate on banks' overnight holdings with the central bank – the so-called deposit rate – to minus 0.10 percent, with the aim of "punishing" banks who park their excess liquidity with the central bank.

The German term for the practice reflects this thinking: Negative interest rates are known as "Strafzinsen" or "punitive rates."

The logic was to give banks the incentive to lend the money to the private sector instead. The ECB tightened the screws again in September by further lowering the deposit rate to minus 0.20 percent.

But the policy has had its critics from the start, not least in Germany, where the ECB's "unconventional" policies are generally regarded as being too risky and overstepping its mandate. Some ECB watchers warned in advance that the largely untested policy could actually have potentially harmful unforeseen consequences.

And such concerns now appear to be backed up by Commerzbank's move.

"Punitive interest rates crown the failure of a monetary policy that has made saving increasingly unattractive since the start of the crisis," complained Lutz Goebel, head of the federation of family-run businesses, ASU.

"Instead of generating more investment, the ECB's policy of negative rates is adding to the burden on the economy," argued Martin Wansleben, president of the DIHK federation of chambers of commerce.

With the ECB's key "refi," or refinancing rate, currently at an all-time low of 0.05 percent, many savers across Europe are feeling the squeeze.

But in a country such as Germany, where households and businesses often prefer to place their money in safe but unsexy savings accounts rather than investing it in bonds and shares, they are more painful still.

The mass-circulation daily Bild, on one of its front pages, directly linked the ECB's policies to fears about poverty in old age.

A small bank in the regional state of Thuringia, the Skatbank, has said it will levy a charge of 0.25 percent on all clients with savings in excess of 3 million euros. Admittedly, that means the rich will be hit rather than small-time savers. Nevertheless, opinion is divided whether other banks might follow the lead of Commerzbank and Skatbank.

Frank Kohler, chief executive of Germany's biggest cooperative bank, Sparda-Bank Berlin, said at the end of October that negative interest rates could no longer be seriously ruled out in retail banking. But Georg Fahrenschon, head of the German Savings Banks Association, DSGV, insisted that "there will be no negative interest rates at savings banks."

The German BdB banking federation also said retail customers were unlikely to face such charges in view of the "fierce competition among banks." Nevertheless, each bank was free to set their own interest rates, a federation spokeswoman added.