Amid Western sanctions, Moscow aims to be a global financial center 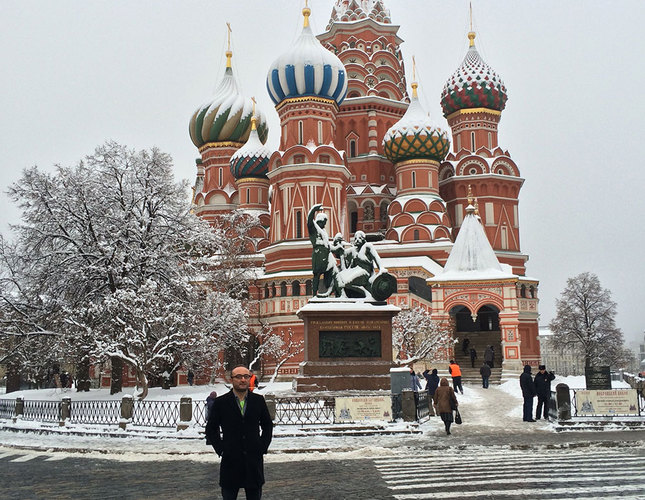 Russia is starting an ambitious program to develop Moscow into the world’s biggest global finance center to overcome Western sanctions and its worsening economy. The Program is providing large opportunities for Turkish construction firms

After the introduction of harsh Western sanctions against Russia as punishment for its role in destabilizing Ukraine and oil prices and the ruble hitting record lows, Russia is trying to revive itself with an ambitious program. To present the development program, the Moscow City government invited foreign journalists from around the world to the fourth "It's Time for Moscow" international forum at Moscow's World Trade Center Dec. 8-11, 2014. It was organized in cooperation with the Moscow Department for Foreign Economic Activity and International Relations.

The Moscow City government wants to turn the Russian capital into a global finance center that is bigger than London and New York, transforming it into an international financial center by building business centers and overhauling its regulations to present an open face to investors.

Moscow City Government's plan to become a global financial center is providing big opportunities for Turkish construction firms. Turkish investors in Russia are currently undertaking work worth $50 billion, particularly in the construction sector. While visiting Russia in 2013, Turkish President Recep Tayyip Erdoğan had said Turkey was planning to increase its trade volume with Russia to $100 billion by 2020.

Moscow City Government's primary objectives are to solve the city's infrastructure problems, to make reforms to ease bureaucracy for foreign investors and increase its tourist attractiveness. Moscow is the capital city and most populous federal subject of Russia and the northernmost mega-city on the planet. It's also the most populous city in Europe and the fifth largest city on earth. Moscow has a population of 12 million. But with the high rate of illegal immigration, the true figure today may be anywhere up to 20 million. Moscow's trade volume is now around 300 billon euros a year. The city makes 20 billion euros in purchase per year.

At the forum, participants, including city officials, local or foreign businessmen and media representatives, emphasized that Moscow is one of the most expensive cities in the world. But they underlined that the city has become attractive for foreign investors with the ruble hitting a record low.
Moscow city government officials said property taxes in the city have dramatically decreased, and this is a great opportunity for foreign investors. Western sanctions have been affecting both Russian and American entrepreneurs, they said. Foreign businessmen said in the forum that a safe business climate is the most important thing for foreign investors. However, they complained about regulations and bureaucracy in the country.

The Moscow city government and the Kremlin are now considering easing these problems because the country desperately needs foreign capital flow amid the worsening economy as a result of sanctions and falling oil prices. Therefore, they are trying to attract foreign private investments and utilizing new technologies to form a favorable investment climate. In the forum, several successful foreign investors described their adventures in Russia.

One of them was Jerry Ruditzer. As founder and owner of the Coffee Bean coffee chain in Moscow, he said that he had come to Russia in the 1990s with just $70,000. He said he found great opportunities back in the '90s after the Soviet Empire collapsed. According to Ruditzer, Russian people yearned for decent coffee. "There was no good coffee in Russia back then. So I said, 'Hey guys I'm here.' My shop received a great deal of attention in a short time." And under those circumstances he said he developed his first coffee shop into a big coffee chain in a couple of years. Ruditzer said he now employs 200 Russian citizens.

Another foreign businessman, Thiery Cellerin, general director of digital marketing agency BuzzFactory, said bureaucracy problems in Russia are decreasing over time. He said: "Primarily, I came to Russia for its beautiful women. I fell in love with Russian women. It took two years to establish my first company in Russia, one year for my second company and just six months for my third. I mean, as long as Russian officials begin to know and trust you, it becomes easier to establish a business in the country."

All the foreign businessmen at the forum could speak Russian fluently. So, a journalist asked, "How come all of you can speak such fluent Russian." Ruditzer answered, "It's much simpler this way." However, they complained about the traffic and parking problems in the city. Moscow city government officials said traffic is not so bad in the city. But as a foreign journalist, I saw serious traffic jams in the city while I was traveling around. The officials said they would make big investments in infrastructure to ease the traffic problem.

The other target is to increase tourist appeal. Moscow city government officials are planning an ambitious program to make Moscow the biggest tourism city in the world. To do this, they will invest 19 billion euros.

A big restoration program is being carried out in the city. Old Soviet-era buildings are being renovated and turned into tourist attractions. Industrial facilities have also been renovated. And 20 percent of the area is reserved for green zones. According to officials, this is the biggest restoration in all of Europe. Moscow is a very historical city. You see a historical building in almost every corner. Historical monuments and buildings from Tsarist Russia and the Soviet Era leap to the eye. For example, Tsar Aleksey's wooden palace was very interesting. The unique aspect of the palace was that it was built without using any saws, nails or hooks. It has over 250 rooms and several corridors and porches. The palace was adorned with intricate designs. The palace was reconstructed and opened again in 2010. However, a number of things from the original palace have been preserved and are on display in the museum.

Besides, there is a good restaurant within it. From among the guests, they picked me to wear a Boyar (highest rank of the feudal Russian
aristocracy) costume. While in a Boyar costume, I stood beside other guests also wearing historical costumes, while Russian singers sang their songs and entertained other tourists.

Moscow gives great importance to the tourism sector. Officials are preparing special guides for tourists and assigning police officers who speak English to help tourists. They underlined that Moscow is one of the safest cities in Europe underlining that only 32 crimes were committed against foreign tourists in 2011-2013. According to Russian officials, there are 5,000 historic architectural buildings in the city center alone. Also, they said Moscow provides appealing prices for foreign tourists. Entrance to 70 museums is free for foreign tourists.

Moscow has become the most popular European destination for Chinese tourists. Turkish tourists ranked fourth among foreign visitors to Moscow.

Moscow city government's other move is to help small and medium sized enterprises develop original products. Therefore, the city government established the STROGINO Technopark. STROGINO Technopark commercial enterprises are a starting point for small innovative companies, providing ideal conditions for business operations. STROGINO Technopark was established in 2007 by the Moscow State with the support of Mineconomrazvitiya of Russia. When we visited the techno park, we saw interesting products and facilities. They also reminded me of Soviet era science fiction films. However, a hard disk with its two cryptos and video games produced there were very impressive. A stand official told me, "We are open to interesting ideas from around the world and ready to help game developers."

According to STROGINO Technopark General Director Sergey Teplov, "We have new ideas, interesting projects, perspective team and ambitious plans for the future." They provide cheap leasing, industrial assistance and storage and office space to small sized firms, and 50 small-sized and innovative firms are accommodated in the Technopark. They are another hope for Russia to revive its worsening economy.

Foreign media representatives also attended the fourth Moscow Urban Forum, held at the Manezh Central Exhibition Hall on Dec. 11-14. Moscow Mayor Sergei Sobyanin met with Ankara Mayor İbrahim Melih Gökçek, who came to Moscow to take part in the forum. At the meeting, the mayors discussed the experience of Moscow and Ankara in addressing traffic issues, including developing public transit systems, arranging parking areas, building transport infrastructure and using new technology for road repair. Gökçek invited the Moscow mayor to visit Ankara at any convenient time. Mr. Sobyanin accepted his invitation with gratitude. The mayors signed a cooperation program between the Moscow government and the Municipality of Ankara for 2015-2017. The program provides for exchanging experiences and holding mutual consultations on the key points of urban development, including public transport and road infrastructure development, urban planning, housing and utility services, social protection, environmental protection, information technology and sports development and cultural heritage conservation. Moscow and the Turkish capital have traditionally enjoyed strong business, cultural and social ties, which were established in 1965. Since 1992, cooperation between the Moscow and Ankara governments has been based on the protocol of friendship and cooperation. In the first nine months of 2014, the number of Turkish tourists coming to Moscow increased by 9 percent compared to the same period in 2013, totaling 117,000 people. Last year, trade between Moscow companies and their Turkish partners amounted to $3 billion.