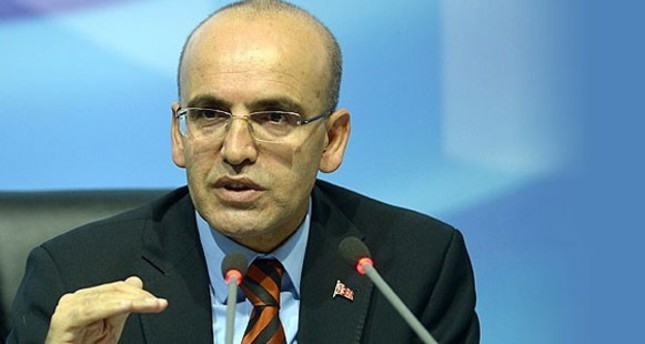 by Daily Sabah Dec 16, 2014 12:00 am
"We estimate that the general state budgetary deficit will be 0.8 percent, which is 0.3 point less than targeted," Finance Minister Mehmet Şimşek said, adding, "With this proportion, Turkey's budget performed better than 25 out of 28 EU countries."

In a written statement, Şimşek commented on the budgetary implementation results for November, saying that the central government's budget had a surplus of TL 3.6 billion in November, and a deficit of TL 11.3 billion in the January-November period. Şimşek noted that the budgetary deficit that was seen in 11 months of the year corresponds to 46 percent of TL 24.4 billion that was expected for the entirety of the year, which is compatible with their expectations.

Şimşek also stated that they estimated in the Medium Term Program for 2015-2017, that the budgetary deficit of 2014 will be TL 8.8 billion lower than the objectives, continuing, "In parallel with this, we estimate that the general state budgetary deficit will be 0.3 points less than the target, with 0.8 percent. With this proportion, Turkey has a budget performance which is better than 25 out of 28 EU countries. This success has been achieved in a year when two important elections including local and presidential elections were held. This once again shows that our government has not abandoned fiscal discipline, and not implemented an economic policy for elections in any way."

Şimşek underscored that the performance, which was far above expectations, was an undeniable success in a year during which domestic and foreign demand was weak due to the weak course in the global economy, financial fluctuation and geopolitical tensions.