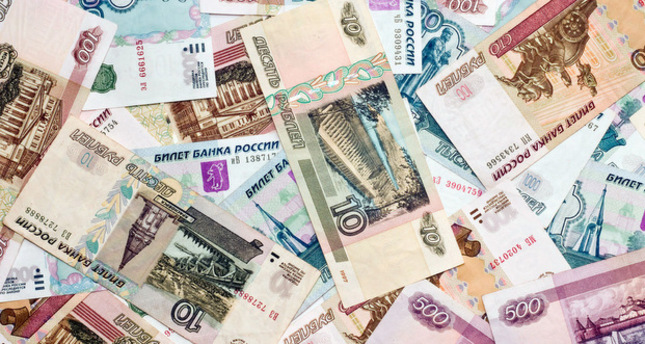 by Şeyma Eraz Dec 17, 2014 12:00 am
The Russian ruble faced intense selling pressure yesterday falling at one stage by a whopping 20 percent to historic lows despite a massive pre-dawn interest rate hike from the country's central bank. The currency, which has been under pressure for weeks because of sliding oil prices and sanctions imposed on Russia in the wake of the crisis in Ukraine, has extended Monday's collapse when it declined by 10 percent.

It traded at 72 per dollar late Tuesday afternoon. That's a modest improvement on where it was trading earlier it hit 78.5 to the dollar but still means that the currency is more 60 percent down from where it was in January. Aware that imported goods were rising in the wake of the ruble's slide, there have been growing indications that Russians have recently been stocking up on big-ticket items, such as fridges and cars. Speaking to Daily Sabah, economist Cemil Ertem said that speculations on the ruble are part of the continuous attack on Russia by the European Union that begun with the reduction of oil prices.

Tuesday's ruble slide came despite the surprise decision from the Russia's Central Bank to increase its benchmark interest rate to 17 from 10.5 percent. The country's television stations urged people not to panic. The central bank's move aims to make it more attractive for currency traders to hold onto their rubles doing so gives them a major return, certainly in comparison to many other currencies, such as the dollar, where the interest rate returns are near zero percent. "This is a transformation of the financial system. The EU continues its attacks against Russia to defend itself in the global economy. These attacks are more than a central bank can handle," said Ertem.