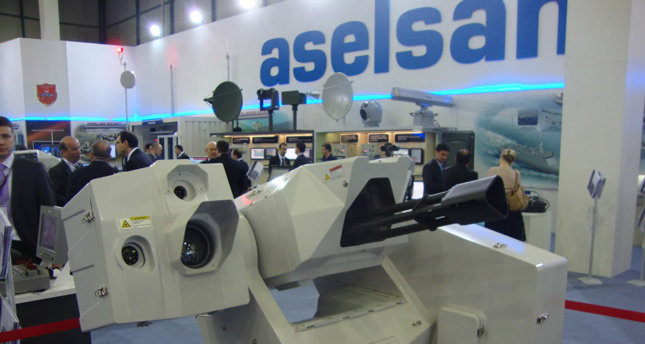 by Daily Sabah Dec 18, 2014 12:00 am
The Turkish defense industry is consolidating its position among the world's giant arms manufacturers. Despite an average decline of 4.5 percent in sales by the world's top 100 defense companies, Aselsan, which previously ranked 87th, now ranks 65th with an increase of 29 percent in sales.

While Aselsan is out-selling big companies such as Mitsubishi, Kawasaki and Samsung, it is also consolidating its position in the top 100 defense companies. Aselsan, which is one of the largest 100 companies on the list of Stockholm International Peace Research Institute (SIPRI), has risen from 87th to 65th place, becoming the fourth fastest-growing company on the list. In 2013, Aselsan's turnover surged from $860 million to $1.1 billion.In this year's study, SIPRI opened a separate category for developing countries, as these countries, including Turkey, Brazil, South Korea and Singapore, produced more weapons than in previous years. The report suggests that "Aselsan has experienced a rapid rise despite entering the list in 2010." In past years, only American, European and Russian companies dominated the global market. Even though the U.S. has the largest share today, an upsurge is seen in the shares of developing countries. The U.S. and other NATO members account for two-thirds of sales revenues of defense equipment and weapons. The share of these countries in global arms purchases is 84 percent. There are 38 American companies among the world's largest 100 arms manufactures, of which sales revenues declined by 4.5 percent in 2013.

Aselsan, which is the most important resource provider for the Turkish army in electronic devices and systems, aims to be one of the top 50 defense companies in the world.

The Russian arms industry welcomes the increase in order entries. The sales revenues of Russian companies, which are on the top 100 list, increased by 20 percent in 2013, with a Russian tactical missiles producer achieving a 118 percent increase in sales. The Russian government, which has increased its war power and modernized its army in recent years, attaches priority to local institutions in the defense industry.