Beijing to get third airport to reduce congestion, delays 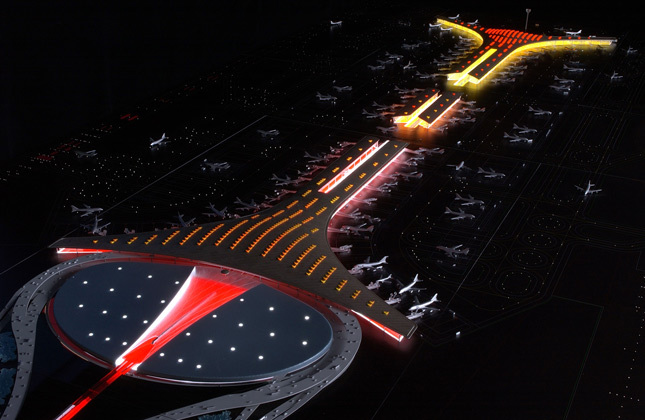 by Daily Sabah with AP Dec 18, 2014 12:00 am
China has green-lighted a third airport for the capital Beijing in a bid to reduce congestion and chronic delays, state media reported yesterday.

According to AP, the massive new airport will be located 46 kilometers (29 miles) south of the city center and take five years to build, according to the China Daily newspaper and other outlets. When completed, it will handle 72 million passengers per year, taking the pressure off Beijing Capital International Airport in the city's northeast that is the world's second-busiest, handling more than 83 million passengers last year.

A second airport, Nanyuan, is a former military airfield with limited capacity. China is splashing out on specific infrastructure as part of efforts to limit its economic slowdown.

Beijing's is the third airport to get the go-ahead in just the last month, while feasibility studies for five other projects were approved in October. State planning agency the National Development and Reform Commission has set the airport's construction budget at just over $13 billion dollars. Designed by Netherlands Airport Consultants B.V., it will have a 700,000-square meter (7,500,000 square foot) main terminal and capacity to process 2 million tons of cargo per year. The airport will be connected to Beijing by a 66-kilometer (41-mile) light rail line with travel times under 30 minutes.

China's fast growing air travel market is the world's second biggest, but the heavy air traffic and tight control of airspace by the military have given it the world's worst record for flight delays. Flight cancelations and delays have sparked frequent incidents of air rage aboard Chinese flights and at airports.

Elsewhere, Turkey has been building its third airport since June. Istanbul Grand Airport, to be completed by 2018, is part of the Turkish government's plan to transform the city into a regional transport hub. It is expected to be the biggest in Europe. The airport is located in Arnavutköy, a district in the northern part of the city's European side.

The Cengiz-Kolin-Limak-Mapa-Kalyon Consortium, a joint venture of Turkish companies, won a tender for the third Istanbul airport in May 2013, promising to pay the state 22.1 billion euros (plus tax) over 25 years starting in 2018. Built over an area of about 79 million square meters, the airport will considerably relax aircraft traffic on the European side of the city. The third airport will have a capacity of 150 million passengers per year.