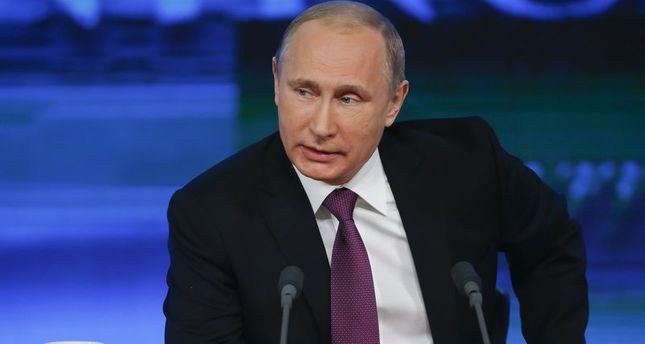 President Vladimir Putin of Russia said on Thursday that Russia will increase energy supplies to Turkey via the Blue Stream pipeline. Russia's cooperation with Turkey regarding energy resources was an issue Putin discussed during his annual end-of-the-year news conference on Dec.18.

Putin said: "Turkey needs energy resources. Our Turkish partners asked whether we could increase the energy supply via the Blue Stream pipeline. We cannot refuse them." He also touched on the issue of the cancellation of the South Stream project and the new natural gas pipeline project to Turkey and Greece. "Building a gas distribution facility on Turkey's border with Greece is not up to us, it is up to the EU," he said. "If Europe wants reliable and stable gas flow, they can provide it from this line. The thing is that there is no natural gas supplier cheaper and safer than Russia."

Meanwhile, Bulgaria awaits a final settlement on the South Stream pipeline issue following Putin's announcement of the cancellation of the project in Turkey on Dec. 2. The energy ministers of Bulgaria and Russia, Temenujka Petkova and Alexander Novak, respectively, will discuss the future of the pipeline project by phone on Friday, according to Bulgarian Energy Ministry officials. "It's hard to explain to people that if the South Stream goes through Bulgaria it will be bad, but if it goes through Turkey and Greece it will be better," said Bulgarian Prime Minister Boyko Borisov. He added that Bulgaria expects a final solution after the discussion with Russia on Friday.

Regarding the EU's request from Turkey to join the sanctions on Russia, Putin said: "We have many common interests with Turkey on regional issues. Because of that we intend to develop our relations with Turkey, and we will. When I was in Turkey I said to President Recep Tayyip Erdoğan, 'We don't have to talk about everything in front of the press, they may come here from the EU tomorrow.' Erdoğan told me that they don't have any concerns. Erdoğan is a tough man. We don't intend to hide anything."

International relations as well as economic and energy issues were also in the spotlight at Putin's press conference. He said the Ukraine crisis should be resolved as quickly as possible and that Moscow's aim was to restore political unity in Ukraine. He also warned Kiev that it must respect all its regions if it wants peace. Russian stability is supported by Russian people, according to Putin. He said he feels the support of the nation. He also criticized NATO's eastward expansion following the fall of the Berlin Wall and said Kiev was wrong to use armed forces against the separatists in eastern Ukraine.

Putin has also touched on the issue of the economy during the news conference. He said that the Russian economy might take up to two years to recover from the doldrums into which it has fallen. He began his annual question and answer session with journalists by speaking about Russia's economic crisis. He said it could take two years to for a recovery to take hold, but that it might also take less time. He further said that Russia needed to take the opportunity to diversify its economy to protect it from external shocks. "Current external conditions are spurring us on, will make us more effective, switch us to the innovative development path," he said.

He called the response of the country's central bank and the government "adequate." He said the central bank would not waste foreign reserves propping up the ruble, but that the current interest rate level would not last the whole of the economic crisis.

The ruble made a modest rally against the dollar and the euro in early trading on Thursday morning.

The dollar fell to 58.3 rubles, while the euro fell slightly further to 71.9 rubles. This comes two days after the ruble's historic plummet, when the Russian currency lost 20 percent of its value in one day, reaching lows of 80 rubles and 100 rubles to the dollar and euro, respectively.