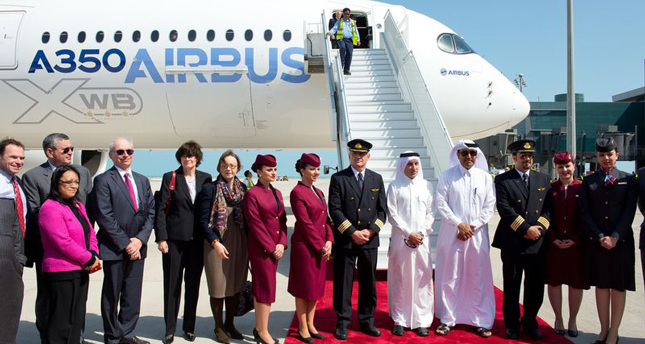 by Associated Press Dec 23, 2014 12:00 am
Airbus has at last delivered its first A350 jet, handing over the wide-body plane to Qatar Airways after years of delays and a multibillion-dollar redesign. The Doha-based company, owned by the energy-rich Gulf state, has ordered 80 of the planes, making it not only the launch customer but also the largest single customer of the A350 so far. Qatar Airways's first A350 was due to be delivered on December 13 in the southwestern French city of Toulouse where Airbus is based, but the airline postponed the handover at the last moment and is now due to take ownership of the fuel-efficient plane yesterday. Airlines are in a major push to modernise their fleets to reap the energy savings that the latest generation of planes offer, especially as competition in the sector is fierce and fuel is one of biggest costs. For the moment, American rival Boeing dominates the lucrative market for long-haul, mid-sized planes with its B777 and next-generation 787 Dreamliner outweighing the European firm's A330. But Airbus hopes to catch up with its A350, whose wings and fuselage are made of carbon fibre and which will save up to 25 percent in fuel consumption. Airbus invested 10-12 billion euros ($12-$15 billion) in its strategy to position the A350 between the popular B777 and the Dreamliner, hoping to eat away at both planes' markets. So far, the plane has been a success with 778 orders already registered by the end of November. Boeing, meanwhile, has accumulated 1,055 orders for the Dreamliner, which was launched several years ago. The first commercial flight of Qatar Airways's brand new plane will take place on January 15 on the Doha to Frankfurt route, and the second A350-900 should come into operation in February, Airbus and the airline have told journalists.

According to AP, the European planemaker hopes the A350 XWB will help it catch up in a long-haul market dominated by rival Boeing's 777 and 787. Airbus revamped the original A350 design to make it more fuel-efficient and marketable. It's the company's first new-generation passenger jet since the superjumbo A380. Qatar is working to transform itself into a major aviation hub as the natural gas-rich Gulf nation prepares to host the soccer World Cup in 2022.