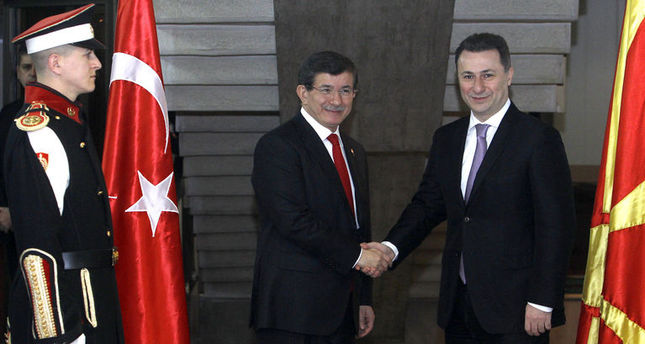 Prime Minister Davutoğlu said he would not accept Turkey being the second biggest exporter to Macedonia, emphasizing the importance of a strategic partnership as well as political affinity

Prime Minister Ahmet Davutoğlu held a meeting over breakfast in his hotel with representatives from the Macedonia-Turkey Chamber of Commerce during his official visit to Macedonia yesterday. Claiming that relations between Macedonia and Turkey are of the utmost importance, Davutoğlu said that Macedonia is a sister country of Turkey and therefore, strategic investments should be planned with this vision in mind. He also underlined that, due to Macedonia's proximity to global ports and given its unique characteristics, the country can be considered the heart of the Balkans.

Speaking at the breakfast, Davutoğlu said that he visited almost every inch of Macedonia during his role as chief adviser and minister of Foreign Affairs and that these lands are not unfamiliar to Turkey. "The culture, the history is a part of our culture and history. You wouldn't feel like a foreigner in this county. This cultural affinity is crucial for the business world. Secondly, the political affinity is also important as we don't have the bond of trust as solid and established with any other country but Macedonia," said Davutoğlu. He further said that Turkey was the first country to recognize Macedonia with its constitutional title and was the first country to send an ambassador. "Whenever this is discussed, before NATO or any other group, Turkey recognizes Macedonia's constitutional title first," added the prime minister.

The prime minister claimed that the signing of a Strategic Business Collaboration agreement with Macedonia in 2010 had helped bring the two countries closer together, although he would prefer them to be closer. Davutoğlu said that Turkish businesses in Turkey are of the utmost importance for Macedonia with Turkey being Macedonia's 13th highest exporter while Macedonia is Turkey's eighth highest exporter. The prime minister would however prefer to be Macedonia's biggest exporter. "I won't accept Turkey to be even in second place. We should establish the highest trade volume between Macedonia and Turkey," added Davutoğlu.

Davutoğlu met with his counterpart Macedonian Prime Minister Nikola Gruevski yesterady. After the meeting, the two prime ministers held a press conference where Gruevski invited all Turkish businessmen, particularly those engaged in tourism and agriculture, to make investments in Macedonia and further noted that businessmen from both countries should collaborate by entering into each other's markets.

Noting that during his role as the finance minister in 1999, the trade volume, which was $50 million at the time, had increased nearly tenfold after the signing of the Free Trade Agreement.

According to data released by the Turkish Economy Ministry, all kinds of processed foods and agricultural products, fresh vegetables and fruits and construction materials have the highest export potential.