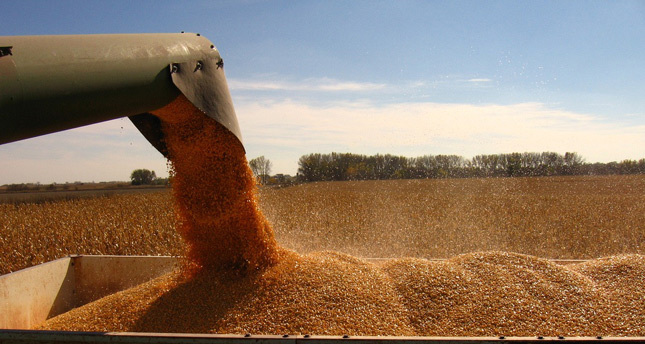 "Since last Thursday not a single vessel, which had been due to sail under contracts, has left," Arkady Zlochevsky, the head of Russia's Grain Union, the farmers lobby group, said. Officials also plan to impose duty on grain exports. Zlochevsky said its exact level was an unimportant detail, as he was sure it would be prohibitive. "All loadings are suspended, there is only a need to legally formalize it," Zlochevsky said. Global wheat futures rose after his comments. A spokeswoman for Russian Deputy Prime Minister Arkady Dvorkovich, who had promised to prepare the proposal for an export duty, was not available for comment. Zlochevsky criticized the decision to impose restrictions for the third time in six years. Russia imposed a duty on wheat exports in 2008 and an official ban in 2010 when a drought hit its crop.

The 2010 ban was partially responsible for triggering social unrest and a revolution in Egypt as more than 500,000 tons were not supplied and global prices rose damaging Egypt's state bread subsidy program, Zlochevsky said. About 3 million tons of grain due for export until the end of January were now stuck, Zlochevsky said. As a result, Russia may fail to supply wheat to Egypt's General Authority for Supply Commodities (GASC), the state buyer of the world's largest wheat importer, in January, he added. "Of course, it includes supplies to GASC. How would we be able to supply it?" He said shipments would only be possible if and when the government makes an exception for Egypt. Mamdouh Abdel Fattah, GASC's vice chairman told Reuters on Wednesday that trading companies were obliged to abide by their contracts to ship Russian wheat to Egypt. GASC purchased 180,000 tonnes of wheat for January shipment, of which 120,000 tonnes for Jan 11-20 shipment purchased on Dec 11 and 60,000 tonnes for Jan 21-31, bought on Saturday.

"If there will be no Russian wheat available for Egypt by a government decision then the firms can proceed to negotiate with GASC to change the origin in the contract," a Cairo-based trading source said. Russia, expected to be the world's fourth-largest exporter this year, had been exporting record volumes from a large grain crop of 105 million tons. "What's clear is that they won't sell anything anymore," a European trader said. "Now the market wants to have more details on what the government will do concretely."