Streaming release of ‘The Interview’ test for industry 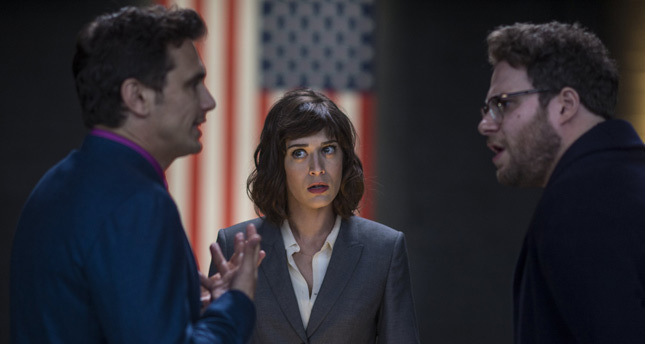 by Associated Press Dec 26, 2014 12:00 am
Sony's film "The Interview" has been a hacking target, a punchline and a political lightning rod. Now, with its release online at the same time it debuts in theaters, it has a new role: a test for a new kind of movie release.

"The Interview" stars Seth Rogen and James Franco as journalists tasked by the CIA with killing North Korean leader Kim Jong Un. Its Christmas Day release was canceled by Sony after threats of violence by hackers linked to North Korea. But after an outcry, the release was reinstated in some independent theaters and now, through a few online video services.

Although the circumstances surrounding "The Interview" are unprecedented, experts say the release will be closely watched to see how moviegoers and theater chains react to a simultaneous debut. It's a challenge to the longstanding practice of "windowing" opening a movie first in theaters to maximize box-office revenue before making the movie available in other stages of home video, streaming and television.

"I can't say that this is the future," said Jeff Bock, senior box office analyst for Exhibitor Relations Co. "For this film, in particular, it works because of the saga that goes along with it. But it's nice to have a film we can actually use as a guinea pig for a video-on-demand release."

Sony released "The Interview" on Wednesday on a variety of digital platforms Google Play, YouTube Movies, Microsoft's Xbox Video and a separate Sony website. It costs $5.99 to rent for 48 hours and $14.99 to purchase. It also will open in more than 300 smaller theaters on Thursday, though major chains are still holding out. Carrying "The Interview" marks another step in Google's efforts to establish YouTube as an entertainment hub that features major movies and trendy musical videos not just cute clips of kitties. Google, though, primarily is providing outlets for the movie because it considers itself to be a guardian of free speech.

Decisions by Google and Microsoft to show the movie could open their sites to hacking. Microsoft reported technical problems with its Xbox sign-in system on Wednesday, though it wasn't known whether it was the result of hacking. Microsoft services appeared back to normal by Wednesday night. Microsoft declined comment.

Online availability of "The Interview" comes as more people are choosing to stream video online, largely because of YouTube, Hulu and Netflix, which has been phasing out its original DVD-by-mail business over the past four years. During that time, the number of Netflix subscribers in the U.S. has nearly doubled to about 40 million in a reflection of Internet video's growing popularity. Nonetheless, releasing a major motion picture in theaters and online simultaneously known as a "day-and-date" release" has never been done by a major studio with a mainstream movie like "The Interview." It's been limited to some smaller indie and foreign movies. The upcoming "Crouching Tiger, Hidden Dragon" sequel will be released on Netflix and Imax theaters on the same day, but that isn't a studio production, despite the involvement of the Weinstein Co.

Theater chains have been trying to preserve the traditional theatrical window. Regal Cinemas and Cinemark, for example, declined to screen Warner Bros.' day-and-date release "Veronica Mars" earlier this year. Warner Bros. instead rented from AMC Theaters most of the 270 screens the movie played in while it was also released on VOD.