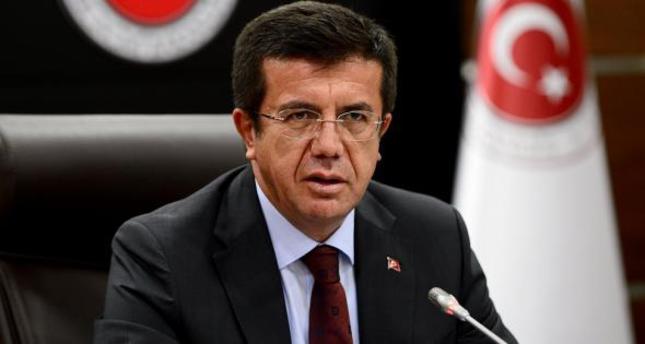 Economy Minister Nihat Zeybekci, at the press conference he held, noted that currently the ministry is applying strategic methods in imports and taking precautions for protecting local production and preventing local production from being subject to unfair competition. "We have commenced 117 damping and compensatory levies for 54 product groups and have further taken precautions for 13 other product groups. In this respect, we have filed a damping claim for the import of U.S.-origin cotton and also a protection precaution for cellphones," said Zeybekci.

The new customs tax regulations mainly target foodstuffs and are initiated as a precaution to protect manufacturers against damages caused by price fluctuations resulting from speculations. Reminding that recently an additional customs tax is levied on wire rods and reinforcing bars, Zeybekci stated that iron and steel sector is critical for Turkish industry and local iron and steel manufacturers will be protected against pressures of imports.

Zeybekci noted that the content of exports is crucial and the biggest damage to Turkish economy is caused by importing consumption goods that can also be produced in Turkey. Therefore, the ministry will strive to protect and boost local production by decreasing imports of goods that are produced or may be produced in Turkey such as electrical home appliances, hand tools, mobile phones, tablets and PCs.

Till today, the ministry has received applications for 177 projects from 108 different consortiums for the UR-GE subsidies and 152 of these projects are currently ongoing. Further, the ministry has provided around TL 50 million for covering costs of more than a thousand offices, warehouses, showrooms and stores established in foreign countries within the scope of Brand and Promotion Support for Overseas Units in 2014.

Zeybekci underlined that they have established Turkish Commerce Centers in order to ensure that exporters can easily reach foreign distribution channels and more will be established. These centers have to have at least one store, office, warehouse or a showroom and the Economy Ministry is currently working on spotting the best and most suitable locations for such centers. "I believe we will soon see more Turkish Commerce Centers established in Iran, Iraq, Turkic Republics included in our cultural geography along with major markets such as Tokyo, Shanghai, Moscow, New York, Paris, et cetera," added Zeybekci. $1.5 million is granted for the rent of Turkish Commerce Centers, $300,000 for marketing activities, $500,000 for employment costs and the upper limit for commerce centers annually is $2.3 million and if such centers are purchases, the ministry will provide incentives up to $6,000,000.

Zeybekci further noted that companies that submit design and product development projects to the ministry also receive support. "Incentives up to $1,000,000 can be granted for the wages of designers and engineers throughout the course of the project, up to $250,000 for equipment and software costs, up to $150,000 for travel and web costs and in general 50 percent of all costs can be subsidized by the ministry. He further announced that they are currently working on a new support program, aimed at providing incentives for supporting high-technology exports of Turkey and the program is scheduled to be initiated within the next few weeks with a budget of around $3.5 million.