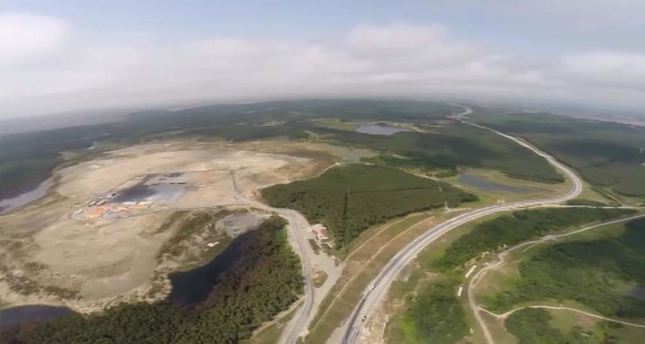 by Daily Sabah with Agencies Dec 27, 2014 12:00 am
Transport, Maritime and Communication Minister Lütfi Elvan yesterday carried out an onsite examination of Istanbul's third airport, which is planned to open in 2018 and transform the city into a regional transportation hub, and responded to criticism on the location of the airport, which is 75 percent marsh. Elvan pointed out that the third airport is going to be a world center in the aviation sector and will provide 120,000 jobs.

Noting that the airport will be located on the Black Sea coast of Istanbul on a field as large as 15,000 football pitches, Elvan said that various airlines would benefit from this airport. "Istanbul's third airport will also acquire international certificates proving environmental safety, and there will be indoor and outdoor parking lots. Ground exploration and drilling work has been carried out in more than 750 fields, and three thirds of the current ground is marsh. The airport should be built on solid ground; therefore, we are working on soil stabilization and foundation improvement work in collaboration with world renowned operations," said Elvan, adding that about 30,000 employees will work on 3,000 machines as part of the preparation work for the third airport.

The consortium for Istanbul's third airport has purchased machines worth around 300 million euros. Elvan noted that currently drilling and soil surveys are taking place, and construction work will commence afterwards. When asked whether there may be any delays in the schedule, Elvan said: "There won't be any delays or extensions to the time frame. Everything is currently in line with the schedule."

When reminded about the Chamber of Geology Engineers warning about the ground being a "marsh," Elvan said that they were aware of the condition of the soil and such warnings were unnecessary and non-scientific. "We are aware that the grounds are marsh, and everyone is working on tests and analyses. We have the requisite technology," said Elvan, adding that while only a temporary permit has been obtained from the General Directorate of Forestry for the drilling and surveys, the most suitable spots will be determined after the permanent permit is obtained. Elvan also noted that given the fast growth observed in the aviation industry, Atatürk Airport, currently the biggest airport in Istanbul, would continue to be used.