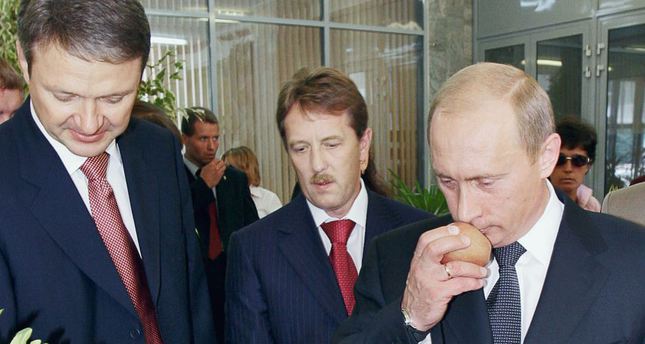 Just one day after Russia banned imports of $380 million worth of apples from Poland, Gennady Timchenko, who is an old friend of Russian President Putin, applied to buy a large stake in one of Russia’s biggest apple producers

As U.S. and European sanctions piled pressure on Russia earlier this year, the Kremlin hit back with an unusual weapon: apples. From Aug. 7 Russia banned imports of fruit from various countries that supported sanctions, including Poland, which has been a strong critic of Russia's actions in Ukraine. The ban had real impact: Poland is the world's biggest exporter of apples and last year sent more than $380 million worth to Russia, according to International Trade Centre figures. While Poland's apple growers are suffering, the ban has also been an opportunity for an old friend of Russian President Vladimir Putin. A day after Russia decreed Polish apples forbidden, Gennady Timchenko, who made a fortune from oil trading during Putin's years in power, applied to buy a large stake in one of Russia's biggest apple producers. Through his investment company Volga Group, he now owns 40 percent of Alma Holding, which has orchards in the Krasnodar region, southern Russia.

For Timchenko, 62, it is a chance both to profit from a market suddenly in need of homegrown apples and to support Russia in the face of Western sanctions. He portrays the investment as a patriotic act, a show of support for Putin, whom he has known since the 1990s, and of defiance against U.S. and European sanctions imposed on Russia over its meddling in Ukraine. "This is our first asset in agriculture. I am sure ... it will complement Volga's portfolio of initiatives to strengthen food security," Timchenko said in a statement in October. "For me it is not just business, it is part of the social mission of my group."

The deal also affords a chance for personal payback. In March, as part of its measures to punish Moscow over Ukraine, the U.S. Treasury put Timchenko on a list of individuals sanctioned as "members of the Russian leadership's inner circle."

The investment suggests Putin's circle may be benefiting from the very sanctions that the West hoped would spur them to persuade the Kremlin to change tack over Ukraine. While external investors have taken fright as the value of oil and the rouble have plunged, allies of Putin such as Timchenko are cash-rich and willing to strengthen their hold on Russia's economy. Nikolai Shamalov, another long-standing associate of Putin, has also recently invested in agriculture. Vladimir Milov, a former deputy energy minister and now opposition figure, said allies of Putin were adept at exploiting "niches" created by the government. "If you take a look at the pattern of guys like Timchenko they have always been moving in a similar way," he said. Timchenko has previously denied that Putin ever helped him with his businesses, and Putin has said that Timchenko did not need his help.

China, Serbia and Azerbaijan have increased exports to Russia to fill the gap caused by Putin's ban on food imports from countries supporting sanctions against Moscow. But Russian farmers and investors still see a chance to exploit one of the few buoyant industries as the country's economy falters. They can do so with the Kremlin's help. When the ban on foreign fruit and various other foods was imposed, the Russian government announced it would increase spending on agriculture to help reduce the country's dependence on imports. It is considering a proposal to boost state support for agriculture by 30 percent to 1.76 trillion roubles ($25.8 billion) over five years.

Timchenko has known Putin since at least the 1990s, when Putin was a local government official in St Petersburg. The Russian leader is honorary president of a judo club that Timchenko co-financed in the city. The bulk of Timchenko's wealth comes from Gunvor, an oil trading business he co-founded that grew rapidly after Putin became president in 2000. Gunvor became one of the largest commodity traders in the world, and Timchenko has amassed a personal fortune of $10 billion, according to the current estimate of Forbes. In March, the U.S. Treasury alleged that Putin "may have access" to Gunvor funds; Putin and Gunvor have said the Russian leader has no connection to the company.