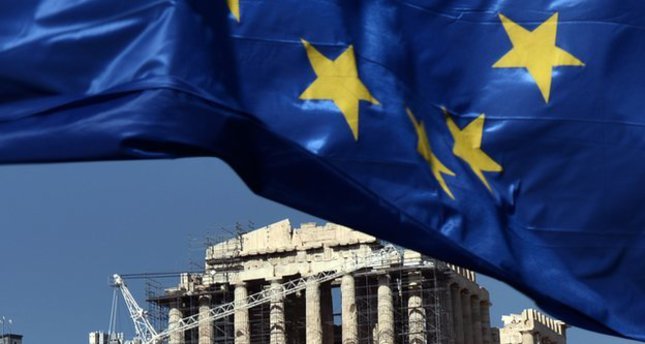 by Dec 30, 2014 12:00 am
Fears of a Greek euro exit have returned with a bang after Athens called early elections on Monday, but steps taken after the financial crisis should stop the rest of the currency zone imploding, analysts say.

The bigger issue is of political contagion across the EU, with anti-austerity parties across the continent likely to be boosted if Greece's radical left Syriza party wins the January 25 polls, they said.

Brussels and Berlin reacted with alarm after lawmakers failed for a third time to choose a new president and triggered snap elections, with both urging Greek voters to back reforms demanded by international creditors.

"This is the worst case scenario", Jan Techau, director of the Carnegie Europe think-tank based in Brussels, told AFP.

"The uncertainty is a stark reminder the crisis is not over."

Greece's debt led the eurozone to the brink of collapse in 2012, with the European Union, European Central Bank and International Monetary Fund coughing up two huge bailouts to avoid Greek exit from the currency, the so-called 'Grexit'.

But Techau stressed it was a "big if" that Syriza would end up replacing Prime Minister Antonis Samaras's centre-right coalition, with Greeks having steered clear so far of radical parties.

Even if Syriza does win, the party's charismatic leader Alexis Tsipras may not carry out his threat to renege on key parts of Greece's bailout agreement with the EU and IMF, analysts said.

Nonetheless, Schmieding said there was "a risk of around 30 percent that Greece may descend into a new deep crisis with potential euro exit beyond the inevitable bout of near-term uncertainty now."

What had changed since 2012, analysts said, was the risk that a Greek exit would spread to the rest of the eurozone -- the single currency bloc that will number 19 countries when Lithuania joins on January 1.

The EU has set up a huge 500 billion firewall to prevent a repeat of the debt crisis, while European Central Bank chief Mario Draghi calmed the storm in 2012 by promising to do "whatever it takes" to save the euro.

The relative strength of Spain and Ireland compared to two years ago was also a positive factor.

"A tragedy for Greece would probably not turn into a systemic crisis for the eurozone as a whole," Schmieding said.

"We're no longer in the same situation as before because the ECB has contained the contagion effects for two years," Cailloux told AFP.

But the risk of political contagion across Europe is another matter.

Left-wing parties such as Spain's Podemos have made huge gains in a relatively short time and see Syriza as a model for challenging harsh austerity diktats from Brussels and Washington.

Podemos leader Pablo Iglesias exchanged celebratory tweets with Tsipras after Monday's result, predicting that "2015 will be the year of change in Spain and in Europe."

Opinion polls put Podemos in the lead in the runup to legislative elections in Spain in November.

At the other end of the political spectrum, right-leaning eurosceptic parties such as Nigel Farage's UK Independence Party are also riding high on widespread disillusionment with Brussels.

"A win for Syriza could boost the popularity of other anti-austerity parties in the eurozone as long as the economic situation in Greece does not descend into chaos following the emergence of the new government," said Diego Iscaro, an analyst with IHS Global Insight.

A Greek exit could meanwhile cause broader geopolitical problems.

There was a risk that if Europe fails to act then Athens could be bailed out by China or even Russia, both of which have a "huge geopolitical interest in gaining influence", said Techau, the Carnegie Europe director.

"We don't want that country under the influence of an outside power," Techau said, adding Greece could be under pressure to veto EU decisions on sanctions on or trade with other countries.

The European Union has imposed a series of economic and other sanctions against Russia over the crisis in Ukraine.