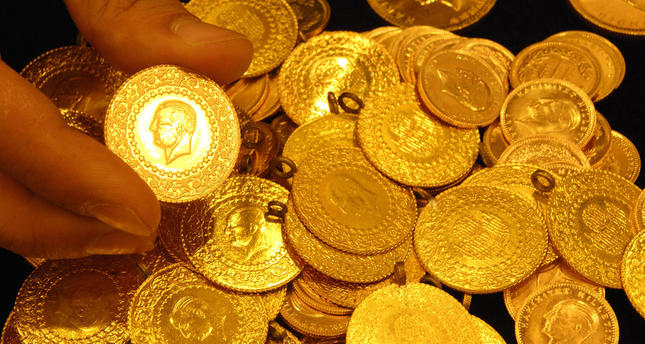 The country's imports in November reached 46.9 tons, an increase of 609 percent from October when the country imported 6.6 tons of gold bullion, according to a statement by the Istanbul Gold Exchange on Wednesday.

The country's gold imports increased by 127 percent to $1.997 billion compared with $879 billion in November 2013. Turkish imports stood at 19.3 tons in the same month in the previous year.

But Turkish imports of the precious metal declined by 56 percent for the period of January to November this year, to 119.1 tons compared with 270.7 tons in the same period of last year.

Turks are, in fact, the world's third-largest purchasers of the precious metal, after the Chinese and Indians. In 2013, the country's gold imports skyrocketed 150 percent, to a record level of 302.3 tons totaling $16 billion in value on booming business with Iran, according to central bank statistics.

Turkey's gold production is only a small amount which is not enough to meet demand, meaning that it must import the precious metal to be able to sell it on to buyers such as India, Iran and countries in the Middle East.

Gold is also seen as a traditional investment for many Turks, who seek security against the declining value of the Turkish lira.

In addition to gold, jewelry is seen as a traditional gift for newborn children and is also given at wedding ceremonies in the country.

The country's $2 billion gold imports in November led to realization of foreign trade deficit above expectations; the deficit stood at $8.3 billion in November, nearly $1 billion more than expected.

Haluk Burumcekci, a chief economist at Burgan Investment, said gold imports have a negative effect on the foreign trade balance, while the energy imports have a positive effect due to low prices this year.
Last Update: Dec 31, 2014 8:04 pm
RELATED TOPICS