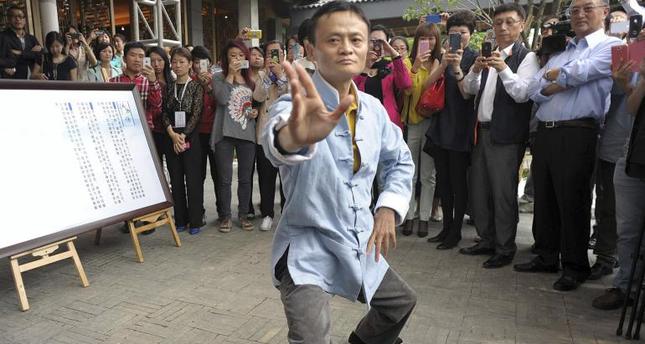 by Hakan Baş Jan 01, 2015 12:00 am
In all, 275 companies went public this year on U.S. exchanges, raising more than $85 billion, according to IPO exchange-traded fund manager Renaissance Capital. That marks the biggest year for U.S.-listed IPOs, by both number and proceeds raised, since 2000. Alibaba Group Holding grabbed most of the headlines. The Chinese e-commerce giant launched the biggest IPO on record in September, raising $25 billion. Here are the top 10 companies that went public this year:

Entrepreneur Jack Ma founded the online marketplace - described by some as part Amazon, part eBay - in his apartment in 1995. It is the biggest Internet company in China, with some 500 million active users. Alibaba also had the year's largest IPO, setting records by bringing in $22 billion for the company. Questions linger about its unique ownership structure, which gives Jack Ma and the Chinese government considerable and somewhat murky control. That could cause problems for investors down the line.

Proving that 2014 is also the year of alternative finance, Lending Club, the peer-to-peer lending marketplace, hauled in nearly a billion dollars by tapping public markets. Started in 2007 by Renaud Laplanche, Lending Club originally let peers provide low-cost financing to their peers, but it has since morphed into a model that lets institutional investors do the same thing. Lending Club said that its IPO officially hit the $1 billion mark with underwriters exercising their full option to purchase 8.7 million shares.

Every big IPO year needs a big clunker too. King, maker of the Candy Crush Saga game for mobile phones shows the dangers of being a one-hit wonder. The colorful game, involving candied fruit slices, provides 80 percent of the company's revenues, and it's had a hard time convincing investors it's capable of branching out. Though it did rake in half a billion dollars from its offering.

Charismatic chief executive Nick Woodman started GoPro in 2002 because he wanted a device that didn't exist in the market at the time - a high-performance, high definition camera that was also highly portable. His vision succeeded and GoPros can be seen everywhere today. GoPro is on the Inc. 5000, and investors clearly love it, perhaps because it produces high-tech hardware, a standout in a year otherwise packed with technology services and software.

Although Richard Branson's space exploration company, Virgin Galactic, is having severe problems stemming from a crash of a space ship that was to have ferried consumers to outer space for short joy rides next year, Virgin America is a lot closer to earth. Branson's low-cost airline, is more than coasting along, however. Its share price is up, as it's benefitting from a sharp drop in oil prices. Branson's legendary dash and charisma no doubt factor in too. He owns nearly a quarter of the company.

Like Lending Club, OnDeck proved that there's a strong market for alternative financing in small business loans, with shares jumping nearly 40 percent on its first day of trading. Unlike Lending Club, OnDeck finances loans through bank warehouse lines and by selling loans to the second market. OnDeck plans to disrupt bank lending to entrepreneurs by using state-of-the-art technology to make decisions within minutes.

The mobile and online food ordering service, which connects diners with thousands of takeout restaurants nationally, actually combines the businesses of Chicago's GruHub and New York's Seamless following a merger in 2013. At the time, both companies had independently pursued plans for IPOs. As a combined entity, GruHub had a strong opening, with shares climbing 50 percent out of the gate, only to close down about 17 percent by the end of the day. The stock has similarly bounced around all year, trading as high as $45 in August, before easing down to its current level. Prospects are still strong for GrubHub, which leads in the online food ordering space.

The company has revolutionized the sleepy and, some would say moribund, world of coupons by moving it online and into the mobile environment. Founded by Steven Boal in 1998, Coupons.com took no institutional money until 2011. It's share price took off for a few months after the offering, but has since returned to more discounted prices.

Joining the fray of startups focused on alleviating fixed costs for other companies, Zendesk has helped revolutionize customer service and help desk functions, turning them into ad hoc services themselves, available via the Web. It was among the top 10 best-performing IPOs this year, according to Renaissance Capital.

The Inc. 5000 company provides pricing information on what others have paid for used and new cars, in addition to operating private label, online car buying programs for USAA, AAA, and Overstock.com. Truecar went public in May, as the air was coming out of the tech market. It did not disappoint however, with shares rising 12 percent the first day.