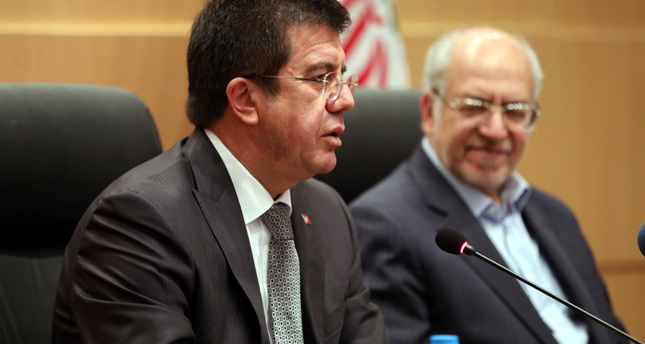 Economy Minister Nihat Zeybekci paid an official visit to Iran's capital Tehran yesterday in order to discuss the elimination of any kind of obstacles for trade between the two countries and the use of local currencies in trade in order to overcome problems in the banking sector. During the meeting between the Turkish and Iranian committees, Zeybekci also got together with Iranian Industry, Mining and Trade Minister Mohammed Reza Nematzade.

During the meeting, which was held at a building belonging to the Iranian Ministry of Industry, Mining and Trade, the committees discussed the preferential trade agreement that will come into force on Jan. 1, 2015, banking relations between the two countries, the use of local currencies for trade, structuring and improvement of border gates and customs clearance, problems in terms of transportation, implementation of a uniform customs clearance procedure and operating the Kapıköy border gate.

Zeybekci said that 2012 was the peak of trade between the two countries, which was mainly due to the gold trade and trade volume, which has been on the decline ever since. "In 2013, the trade volume dropped to $15 billion. This was not only due to the decrease in gold trade but also the real trade volume. The volume dropped even further in 2014 when compared to 2013, despite the trade in gold. However, now is the time to say stop to this declining trend. I feel very lucky as we finally signed the preferential trade agreement - a historical breakthrough," Zeybekci said. He further announced that all approval mechanisms have been completed, and as of Jan. 1, the preferential trade agreement will come into force.

Explaining that Turkey values the negotiations Iran is currently engaged in regarding its nuclear program with P5+1 countries, the five permanent members of the U.N. Security Council plus Germany, Zeybekci said Turkey supports Iran in this cause, and in the past when heavy sanctions were levied on Iran, Turkey was the only country that stood by it both with its government and private sector. "When no other country was providing medicine to Iran, Turkish firms were. Therefore, I don't approve of Iran purchasing medicine from other countries when Turkish pharmaceutical companies are still providing medicine to Iran," he added.

On the latest problems in transportation between Turkey and Iran, Zeybekci said that he hopes these obstacles will be overcome during Iranian Communication and Information Technologies Minister Mahmud Vaizi's visit to Turkey in January.

Nematzade also said that with the implementation of the preferential trade agreement, it would become much easier to reach the $30 billion trade volume target. "It is evident that such a target could have been easily achieved if it weren't for the sanctions applied against Iran; however, suitable solutions should be determined under these circumstances," Nematzade said. According to official data released by the Turkish Statistical Institute (TÜİK), trade volume between Turkey and Iran was at its highest in 2012 with $9.9 billion exports and $12 billion imports. But, after 2012, trade between the two countries showed a downward trend because of the Syrian conflict in the region. In 2013, exports to Iran were $4.2 billion and imports $10.4 billion. Despite the sharp decrease in exports, imports weren't influenced like that because of the natural gas imported from Iran. Iran is on the list of targeted countries (in terms of increasing trade volume) of the Turkish Economy Ministry for the years 2014 and 2015.