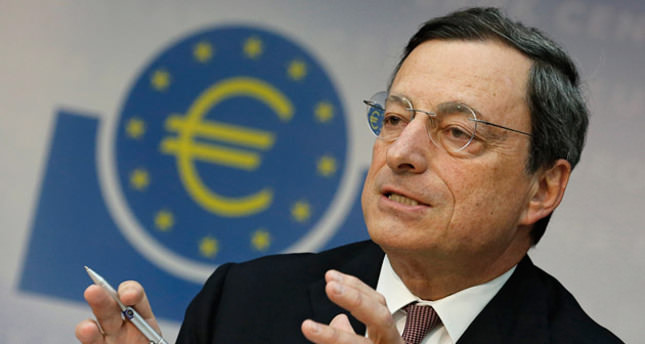 ECB President Draghi pushed the alarm button against low inflation by stating a government bond-buying program would be announced soon, which caused the euro to hit a four year low

The euro fell Friday to a four year after European Central Bank President Mario Draghi indicated the bank could soon low against the dollar back a government bond-buying program to deal with alarmingly low inflation across the 19-country eurozone. In an interview with the German financial daily Handelsblatt, Draghi said the risk the bank won't fulfill its mandate to keep prices stable is greater now than it was six months ago. "We have to avoid too-high inflation and we have to avoid too-low inflation as well," Draghi said. "We are making technical preparations to alter the size, pace and composition of our measures in early 2015."

For many in the markets, that's a clear hint from Draghi that the bank stands ready to back a full-blown bond-buying program on the lines of those undertaken by other central banks, such as the U.S. Federal Reserve and the Bank of England. Many experts think the ECB could make the announcement Jan. 22 at its next monetary policy meeting. In the wake of his comments, the euro fell 0.4 percent to $1.2034, its lowest level since the summer of 2010, when the currency was reeling in the wake of Greece's first bailout and mounting speculation that other EU members were in acute financial difficulties.

The euro has been in retreat for months on the back of expectations that the ECB will back a further stimulus as traders anticipate more of the currency in circulation. While anemic levels of economic growth across the eurozone are a major source of concern for policymakers at the ECB, it's too-low inflation that's prompting the speculation of further action.

Inflation in what is now the 19-country eurozone Lithuania adopted the euro on Thursday stands at 0.3 percent, far below the ECB's annual target of just below 2 percent. The worry is that too-low inflation turns into an outright drop in prices though that sounds good in principle, deflation can choke the life out of an economy if consumers put off purchases in the hope of future bargains.

Although the ECB has cut interest rates to record lows and backed the purchase of some types of private-sector bonds, it has refrained from following others in buying government bonds so-called quantitative easing, or QE.

Proponents of QE say the policy can help shore up a recovery and support prices by reducing the borrowing costs for businesses, households and governments. But many in Germany, Europe's most powerful economy, have voiced concerns about such a program, worried that it would amount to throwing money at profligate states. Success is not guaranteed, as evidenced by Japan's return to recession even though the country's central bank is enacting its own bond purchase program. "The comments suggest the ECB will soon adopt sovereign debt QE which may come as soon as their next meeting," said Lee Hardman, a currency analyst at Bank of Tokyo-Mitsubishi UFJ.