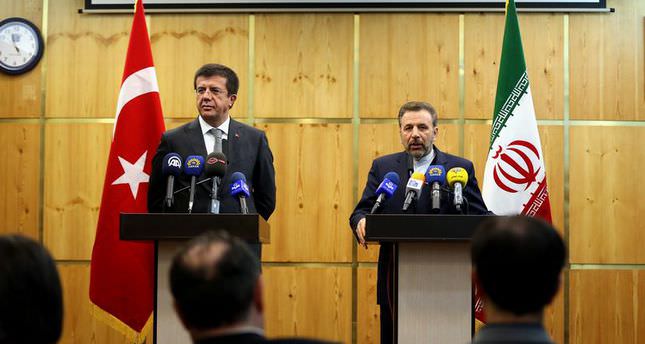 After working for 10 years on a preferential trade agreement, Turkey and Iran have lowered custom taxes imposed on 265 products and are currently working for more. The new target is to increase trade volume to $35 billion

During his official visit to Tehran conducted on the official invite of his Iranian counterpart, Industry, Mining and Trade Minister Muhammed Rıza Nimetzade, Zeybekci spoke about the agreement process and the new era that has started now that the agreement has come into force.

The agreement has been dubbed a "great step" especially given that both countries aim to increase foreign trade volume, which is currently around $13-14 billion to $35 billion towards the end of 2015. "Today is a day of cooperation, a bright new day for improving commercial relations, support and political and economic cooperation between Turkey and Iran," said Zeybekci. Two technical committees will be established, consisting of experts from both countries with the committees set to hold monthly meetings in order to supervise the progress of the agreement and to offer solutions for any possible problems that may occur during the implementation thereof.

"Further, they will also strive to increase the number of product types from 265 to 290, even to 300 for which low or zero customs taxes are applied," said Zeybekci.

Underlining that this was only the start of a productive cooperation in the field of trade between the two countries, the Turkish Minister noted that they have been negotiating on various issues including supporting joint ventures and investments between the two countries, protection of investments, facilitation of trade, increasing cooperation between customs administrations, implementation of a uniform customs clearance procedure and taking precautions for eliminating current problems arising in transportation and deliveries. The technical committees are scheduled to hold their first meeting in January and a large Turkish committee will be organizing a business forum at the beginning of February. "There is already the textile fair scheduled and this new forum will be like an additional mini fair. We again will hold meetings next year, just like we did this year and hopefully, we will achieve great accomplishments in trade and economy of Turkey and Iran," said Zeybekci.

Turkish Trade Center to be established in Iran

Zeybekci noted that while efforts for rapidly eliminating and taking precautions against possible obstacles that may occur during the improvement process of trade relations between the two countries are ongoing, a Turkish Trade Center will be established in Tehran to facilitate these efforts.

Reminding that problems are likely to occur in the business and trade worlds, Zeybekci said the Undersecretariat of Commerce in Tehran will be bolstered and the new Turkish Trade Center to be established will assume an active and crucial role in preventing such problems.

"We are currently in the process of establishing two institutions in Iran. First of all, our Undersecretariat of Commerce will be reinforced, evolving into a center with eight to 10 employees. Further, we will establish a center that hosts various Turkish firms and their offices that will receive support from our ministry. As a result, companies that did not have the opportunity to establish branches in Iran will be able to come as a part of group and engage in activities here," said Zeybekci. He further noted that such developments will be effective in elimination of problems in between the two countries, which are already in decline.