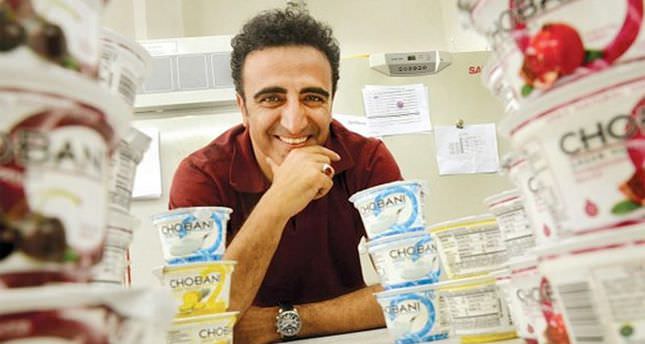 by Didem Atakan Jan 06, 2015 12:00 am
Hamdi Ulukaya will soon be ousted as CEO and chairman of the yogurt company Chobani, which he founded in 2005, according to the daily New York Post's report on Monday.


"Hamdi Ulukaya, the charismatic Turkish immigrant who started the brand in upstate New York in 2005, is being replaced as CEO and may even be stripped of his chairman role", the daily said.

Ulukaya, born in 1972, is the founder and CEO of Chobani, the number one-selling Greek yogurt brand in the U.S. Originating from a Kurdish dairy-farming family in a small village in Turkey, Ulukaya landed in New York in 1994 to study English and eventually signed up for a business program, sensing an opportunity.

With no prior experience in the yogurt business, in 2005 he created a yogurt empire named Chobani, which is derived from the Turkish çoban meaning 'shepherd'. The company went from zero to over one million USD in annual sales in less than five years, and now competes with some of the biggest brands like Danone.

The yogurt empire made Ulukaya a billionaire, whose net worth as of 6 January is calculated to be 1.6 billion USD. Ulukaya was chosen as the World Entrepreneur of the Year in 2013, by the professional services firm Ernst & Young.

Chobani has denied the New York Post's article, denouncing it as "absolutely false", according to a news report by the U.S.-based magazine Fast Company.

The news report said, "For one, the company (Chobani) announced way back in April that it would be installing a new CEO. Two, Chobani says there are no plans to remove Ulukaya from his role as chairman."

"And three, Ulukaya continues to work full-time at Chobani despite transitioning away from operational management," it continued.

The daily claimed that a leading candidate to replace Ulukaya is Kevin Burns, Chobani's President and Chief Operating Officer.