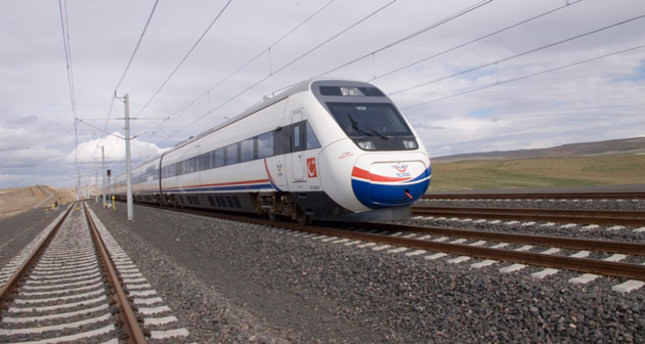 by Daily Sabah with Agencies Jan 10, 2015 12:00 am
Transportation, Communications and Maritime Affairs Minister Lütfi Elvan said that they want to strengthen the infrastructure link with neighboring countries; thus, Istanbul will be connected to the Kapıkule border gate (Bulgaria) with a high-speed railway line passing through Edirne. A tender will be held on this in 2015. Mega projects include the North Marmara Highway, the third bridge and railway lines that will pass over this bridge will be connected to this line. Elvan remarked that the highway link with Greece is also being strengthened and that railway links are being renewed completely, and indicated his expectation that Greece would strengthen its own railway.

Elvan also said they would continue to construct airports across Turkey, expanding into Thrace and the cities of Yozgat and Rize, while a high-speed railway line will reach the Kapıkule border gate. According to Elvan, another priority is to construct railway lines and highways to reinforce transportation facilities reaching border gates and neighboring countries. Touching upon major developments in the aviation industry, Elvan noted that the number of air passengers reached 166 million this year. According to Elvan, airports are being constructed with public-private sector cooperation to make use of the private sector's ingenuity. "We are constructing regional airports that we cannot actualize with a build-operate-transfer model, and we are modernizing existing airports," said Elvan, announcing that the Ordu-Giresun airport will open in March and be followed by the Hakkari airport in May.

Airports are also planned for Thrace and the cities of Rize and Yozgat. The Information and Communication Technologies Authority and the ministry are continuing studies to hold a tender to switch to 4G in the first three months of this year. "Hopefully, we will have switched to 4G by the end of the year," Elvan added. Elvan also referred to three major port projects to be realized on three big seas, pointing to a serious invigoration of the maritime industry in the upcoming period.