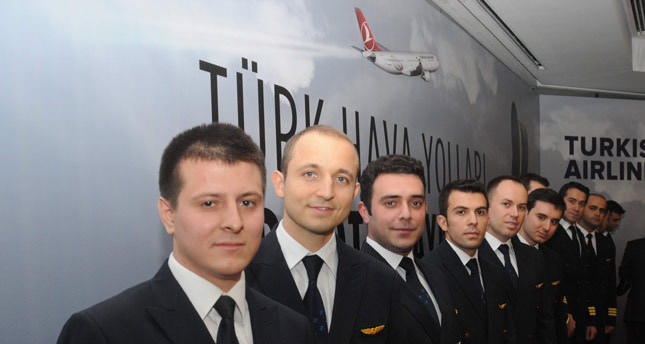 by Compiled from Wire Services Jan 13, 2015 12:00 am
Turkish Airlines (THY) goes on a European tour to recruit pilots and fill its vacancies as the number of aircraft in its fleet approaches 300.

Turkish Airlines will first go to Italy, where it is scheduled to meet Italian pilots at the Sheraton Rome Hotel. During the Road Show, which will be held from January 16-17, Italian pilots will be introduced to THY and given details on the benefits offered to them. The candidates who meet the criteria set by Flight Training Presidency will join the national company's staff as soon as possible.

THY CEO Temel Kotil said they are also holding talks with the managers of 12 flight schools in Turkey to satisfy their pilot requirement, adding, "Pilot requirement is gradually increasing in Turkey and the world. We need 500 new pilots every year. We fill 200 positions with graduates from THY's Aviation Academy in Aydın. However, we still have a deficit of around 300 pilots. In this regard, we need the support of flight schools in Turkey."

According to THY Chairman Hamdi Topçu, the Aviation Academy falls short of meeting the staff requirement as it graduates over 70 pilots every term. "We publish job postings to seek co-pilots for TL 8,000 a month, but the number of applicants remains much lower than we expect. There are unemployed pilots, but many of them aren't satisfied with the salary we offer," he said.

Currently, THY recruits 3,600 pilots, with 76 of them being female, while there are 650 foreign pilots from 45 countries.