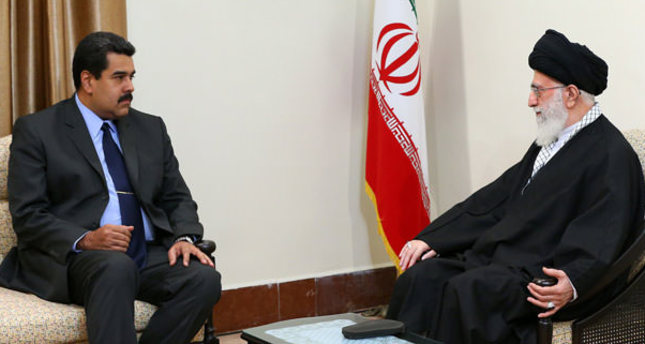 Venezuela and Iran held official talks with Gulf members of OPEC to cut oil output after oil prices dropped below $49 per barrel yesterday, but delegates do not see any sign of a change before their meeting in June

A diplomatic push by Venezuela and Iran for an OPEC oil output cut has failed to soften the refusal of the group's Gulf members to do so for now, delegates said yesterday. An oil price sinking under $49 a barrel yesterday is twisting the knife in Venezuela's steadily shrinking economy and in sanctions-bound Iran. Venezuelan President Nicolas Maduro on Sunday met Saudi Arabia's Crown Prince Salman in Riyadh before heading to Qatar and Algeria on a tour to discuss the oil price crisis. Iran's supreme leader Ayatollah Ali Khamenei also weighed in and told Venezuela's president on Saturday he backed coordinated action between Tehran and Caracas to reverse the more than 50 percent drop in crude since June 2014. But the Gulf members of the Organization of the Petroleum Exporting Countries, who account for more than half of the 12-member group's output, are holding to their stance from OPEC's November meeting in Vienna. "There's a push from Venezuela for a cut, this is what they argued in Vienna and this is what they are lobbying for now. But from what I see there is no sign of cutting production from the Gulf states," a Gulf OPEC delegate said. "The only solution is to have the market absorb this surplus and the extent of that will be assessed by OPEC by ministers during their meeting in June." Another delegate said: "You need to give it some time to see the effect on prices. I think the Saudi oil minister was very clear on that."

Saudi Oil Minister Ali al-Naimi has said he convinced his fellow OPEC ministers that it is not in the group's interest to cut oil output however far prices may fall. During Maduro's visit to Saudi Arabia, it was agreed that a high-level commission between the two countries would meet every four months to review the market, a diplomatic source said. The source added that during Maduro's meeting in Qatar, concern was expressed about prices but Qatar made no promises or commitments as to what action should be taken. OPEC holds its next scheduled meeting in June and sources say there has been no suggestion that it gather before then. Saudi Arabia is unwilling to shoulder any output cut unilaterally and any cut has to be a collective one by all OPEC members, the sources said. But Libya, Iraq, and Iran can all plead for an exemption from an output cut since they are either affected by war or sanctions, an argument that some other producers reject. "The only way for any agreement to work is a full commitment. Venezuela, Algeria, Iran, Nigeria and Iraq all have to cut," another OPEC source said.

Goldman Sachs has lowered their three-month price forecast for Brent to $42 a barrel from $80, and lowered the price forecast for U.S. light crude to $41 a barrel, down from $70 in the first half of 2015. "To keep all capital sidelined and curtail investment in shale until the market has rebalanced, we believe prices need to stay lower for longer," said in the Goldman Sachs report. Global oil prices fell below $50 on Monday, due to high output, against falling demand fueled by slower global economic growth. Brent crude oil prices fell to $49.31 a barrel in early sessions of the week, while U.S. light crude oil fell to $47.52 per barrel.